HAL started the proceedings by attacking from left to right. Within the first minute of the game, Xavier’s powerful shot from the top of the penalty box was fisted out Chandni keeper Sakeer. Call it a start of a bad omen or what, HAL’s strike to their opponent’s goal was thwarted several times by the crosspiece.

Chandni FC took the lead as early 4th minute of the match. HAL keeper Amar Deb was ahead from the goal when Niaz Reahman smartly lobbed the ball to the far post. The placement was accurate, out of Amar’s reach.

HAL equalized in the 18th minute of the game when skipper Xavier Vijaykumar scored the goal from a defensive lapse.

After conceding the 2nd goal, there was certain urgency from HAL, and they went all-out to pressurize Chandni’s defense.

The match was played in high temper and referee flashed yellow card several times to get a control of the game. 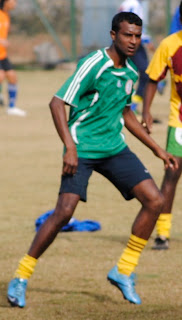 Second-half started in a dull note, with both the teams playing aimless football. HAL looked for an opening but they lacked the fineness of a scorer.

Xavier who primarily plays as a striker would often go down to support the mid-field to control the game. However, while doing so his other striking
partner, Fredrik Okwagbe was left alone without much support. Also, luck didn’t favor them as ball hit the goalpost twice during this time; Chandni keeper was not in a position to save them.

The equalizer came in the dying moments of the match when everybody thought that it was all over for HAL. Substitute Karthigayan centered the ball from the left flank, Sathish Kumar (Jr.) received and passed the ball to Xavier. Captain courageous coolly placed the ball to the goal thus saving his team from the blushes.

Friday’s Match:
Posted by diegostrikes at 7:27 AM