Mohammedan only manages a draw against ONGC

It was an apparent tame start for Mohammedan Sporting in the I-League 2nd division final round. They were down by a goal in the most of the time, until a smart free kick from Brazilian Edu Escobar in the 75th minute helped them to garner 1 point.

Mohammedan started well with some nice moves from the center. However, they conceded goal in the 32nd minute when ONGC skipper Jatin Singh Bist gave an accurate pass to Naresh, Naresh obliged his skippers pass with a nice curling kick to the far post, which was beyond the reach of the stretched keeper Nasim Akhtar.

Striker duo Edu and Liberian Teodor Sunday Wobreh lacked mobility and failed to penetrate. Rather than moving with the ball, Edu depended heavily on his set-piece moves.

Mohammedan coach and former India international, Shabbir Ali replaced a mid-fielder Nelandra Deewan for a defender in Anupam Sarkar in the second-half. This was a smart move as Nelandra’s inclusion gave stability in the midfield for Mohammedan.

Mohammedan could have leveled in early second half - Jyothi Kumar put a fine cross for Theo in the 49th minute, however, the Liberian’s shot, who received the ball and was wonderfully positioned went wide. 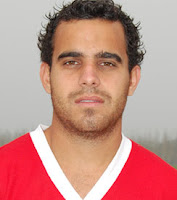 The equalizer came when Nelandra Deewan was brought-down at the top of the box. Edu, whose earlier 3 free-kicks failed to yield any result, was successful this time - his kick on the right side of the post had precision, kissed the horizontal bar, and went inside the goal.

In the  87th minute, keeper Nasim Akthar came up with a brilliant save from Babatunde shot.

The ONGC stoppers, Krishna Shirodkar and Bolaji Majek kept the defense tight, they didn’t give much space to Theo and Edu to maneuver. They pressed hard in the later part of 2nd half with replacement Tarif Ahmed and Babatunde combining well, ably supported by Jatin Bist from the mid-field, however, they failed to score any goal.

NISA Oil India Split Points
In what could be termed as the most entertaining match so far in the 2nd division final phase, two teams from the North-East played a fast-paced game. Oil India took the lead in the 33rd minute thru an H Wary goal, few minutes later NISA scored the equalizer via Malemnganba Meetei.
The teams from Manipur and Assam had the speed, however, the strikers lacked the finishing touch. Manipuri fans thronged the stadium in huge numbers.