Garden city is ready get the taste of top-class national football as the fight is on between mighty Dempo and HAL tomorrow. Dempo comes from a nightmarish last match where they were ploughed by the Airmen 4-0. HAL lost to East Bengal 1-0. Both the teams are finding an avenue to set their record straight.
Dempo seems to be a much stronger side with some quality foreigners and talented local players, not to forget the players who resumed club after performing their duty with the national team. Also, the team does not have any injury scare neither they will be missing any player due to suspension.
On the contrary HAL seems to be a worried lot, they definitely have issue with a quality bench strength. Players missing from any vital position have cost them dearer. With 10 away matches in last 2 months, the much travelled team in the I-league is struggling with injury, James Singh Jr., RC Prakash to name a few.
The management failed to pick a decent bunch of players at the beginning of the season and scouting now before the second transfer window closes.

They might have done so during the qualifying and final leg of the 2nd division I-League held in April-May last year in Bangalore. While the then HAL players impressed and got recruited by the outstation teams, HAL could only recruit few players from neighboring Kerala. Perhaps, the biggest example is Durga Boro. This striker was pretty impressive when he played for Oil India in the 2nd division I-League. Churchill Brothers signed him this season and apparently he scored a goal against HAL.
The most worrisome factor definitely seems to be the ground. Dempo coach Armando Colaco has taken this in his stride quoting that they have played in much worse conditions and his team will adopt to the ground condition. However, there was enough time between the last and tomorrow’s match that could have enabled the authorities to upgrade the ground. 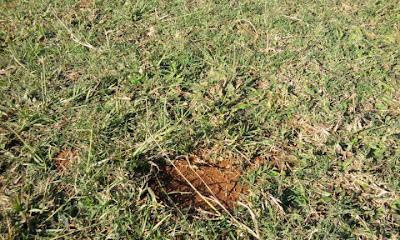 The pitch looked uneven with mini-holes and thick grasses laid across the ground.
With the laying of artificial grass in the Bangalore Football Stadium not gathering momentum, most likely HAL will be playing all their home matches at this venue. Should the authorities does not care about improving the condition of the ground, this will definitely be a grave concern for HAL.
Posted by diegostrikes at 6:48 PM