Haiti international Sony Norde's brace and a goal from Katsumi Yusa five minutes from time brought a halt to Bengaluru FC’s three-game unbeaten run as the Kolkata club beat the Blues 4-1 at the Salt Lake Stadium, in Kolkata, on Friday.

Bengaluru scored from the first chance they had in the match in the sixth minute. Eugeneson Lyngdoh did well to nutmeg Dhanachandra Singh down the right before whipping in a cross across the face of the goal. Debjit Majumder who was in the Mariners’ goal missed the flight completely allowing Sunil Chhetri to head in from point blank.
Mohun Bagan managed to equalize at the half hour mark. The goal stemmed from some poor goal-keeping from Ralte. After Manju elected to play it back to the keeper, he passed it short to Johnson, instead of clearing his lines. The pass had too little pace on it, allowing Norde to seize the opportunity. The winger took his time, and smashed it past a hapless Ralte into the far corner.
The second half was pretty bereft of chances even though the Mariners looked to press on their advantage. Even though Sony Norde and Pierre Boya often combined well, the final pass often let them down. Sanjoy Sen’s boys got a chance in the 74th minute when Sehnaj Singh sent in a long ball to the far corner. Sony Norde did well to hold onto the ball before hitting the side netting.
It was only two minutes later that the team had the lead courtesy Sony Norde. Bikaramjit Singh and Norde exchanged a one two on the half line before Bikramjit played a lovely weighted through ball to send Norde clean through. The Haitian took his time before calmly side footing the ball into the far post.
Henceforth, it got only better for the Kolkata side as Norde added another assist to his bag, four minutes before half time. He held off Lyngdoh before sending in a lovely cross, which took a deflection off John Johnson setting it up perfectly for Katsumi Yusa on the far post. The Japanese managed to head it into the open goal with ease.
Bikramjit Singh added the icing on the cake in the added time. Like before, Norde and Bikramjit exchanged a one two on the half line before Bikramjit went galloping down the middle before unleashing a fierce shot with his left foot. It was a goalkeeping howler that got him the goal though, with Ralte getting a hand to the ball but allowing it to fall into the goal from his grasp.
Sony Norde was adjudged the Hero of the Match! 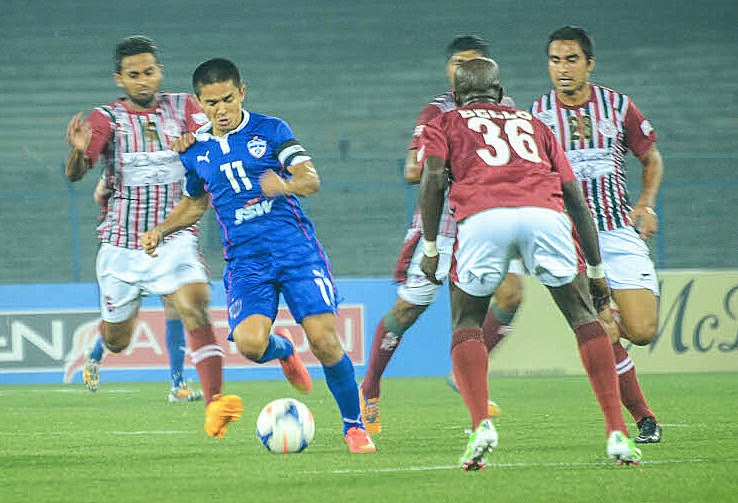 Posted by diegostrikes at 1:48 AM