An extra-time goal from Cameroonian striker Aser Pierrick Dipanda consigned Bengaluru FC to a 1-0 defeat at the hands of home side DSK Shivajians A, ending the Blues’ run at the semifinal stage of the DSK Cup at the DSK Dream City football ground, in Pune, on Friday. The Blues side, comprising five academy players in the starting XI, showed tremendous levels of fitness to put on an impressive display but a goal on the counter secured progress for the hosts, who will play one of Dempo SC or Gangtok Himalayan SC in the final.

Bengaluru started on the attack, building up from midfield and recycling possession well to create a few chances down the flanks. Accompanied by a 16-year-old Shelton Paul in attack, North Korean striker Kim Song Yong came close to breaking the deadlock with a header that skimmed off the DSK woodwork in the 16th minute.

Dipanda seemed to be at the end of every Shivajians move, with a first chance blocked by Blues’ defender Joshua Nallapalli before another attempt going high and wide of the frame at the stroke of half time.

Chances from both sides went wide in the second half as another goalless 45 minutes ensued. Bengaluru sent on U19 players Jonathan Piers and Akshay Kumar as a midfield battle ensued. Substitute Beikhokhei Beingaichho and Alwyn George combined well at the death but little changed as the first semifinal of the tournament went into extra time.

Bengaluru started on the offense in the added thirty but crosses from Beingaichho and Alwyn did little to trouble Shivajians ’keeper Abhishek Das, who did well to collect. Minutes into the second half of extra time, a long clearance from Shivajians defender Don Bosco found Dipanda in the Bengaluru third. The 26-year-old made no mistake as he placed his shot past a hapless Sharath K in the Bengaluru goal.

Bengaluru  gave it their all in search of an equalizer and almost found one when Kim headed Beingaichho’s free-kick inches wide of the target with five minutes left to play. Despite frequent forays into the DSK box, it wasn’t to be a night of comebacks. 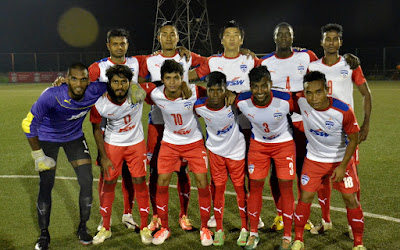 Posted by diegostrikes at 9:20 PM