Bengaluru FC carved history for themselves as the Blues marched into the quarterfinals of the AFC Cup beating Kitchee SC 3-2 in a pulsating game at the Mong Kok Stadium, in Hong Kong, on Wednesday. A brace from skipper Sunil Chhetri (31st and 33rd minute) and a winner from young Daniel Lalhlimpuia (51st) sent Ashley Westwood’s boys through to the last-eight making them the only Indian club left in the competition.

The Blues bowed out at the same stage in the same stadium last season when they went down 2-0 to South China AA. But Bengaluru did more than just exorcise the ghosts rolling out a fantastic performance in every department on the pitch.

Kitchee shot into a 7th minute lead when Rufino sneaked into the box and nodded home skipper Lo Kwan Yee’s cross from the right, on the bounce. Bengaluru got to work without much ado, passing the ball around and forcing freekicks and corners out of the hosts.

The Blues got really close from one such chance when Eugeneson Lyngdoh chose to smartly roll a freekick in the box, catching the Kitchee defence by surprise. But ’keeper Wang Zhenpeng charged out to keep attempts from Curtis Osano and Daniel Lalhlimpuia at bay.

However, the equalizer came just a minute later when Lyngdoh was brought down by Huang Yang in the box, prompting referee Fu Ming to point to the spot. Skipper Chhetri stepped up and sent an audacious chip over Zhenpeng who already committed to make it 1-1.

Chhetri’s second came only two minutes later and just like his first, it wasn’t short on class. A beautifully stitched move saw Rino send in a cross that was headed away by a Kitchee defender only to reach as far as Chhetri who smashed it home on the volley after picking his corner and silencing the Mong Kok.

But a moment of weakness in defence three minutes from half-time saw Kitchee capitalize to make it 2-2. Christian Kwesi slid one in the box as Paramo Jorge sneaked ahead of the Blues defence line, got past Osano and fired past Amrinder.

The tie being a knock-out meant that the away goals rule would not come into play and Bengaluru would need only a win to progress and Lalhlimpuia responded with what would eventually be enough. The youngster made the most to pounce on a poor back-pass by Kwesi, intercepting the ball and putting it past Zhenpeng to make it 3-2.

After the third it was the Blues’ show who kept the attacks constant but were let down by some wayward finishing.
Daniel had probably the best chance of the game in the 88th minute when, after being sent through on goal and getting past Kitchee’s high line, the striker skipped past Zhenpeng only to shoot wide as the Blues bench watched in disbelief.

The misses however didn’t come back to haunt Bengaluru as the defence kept things tight to see the Indian champions past the line. 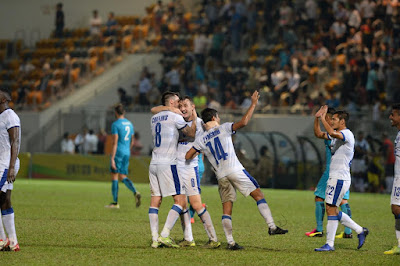 Posted by diegostrikes at 11:43 PM