Bengaluru braced for Tampines fight with semis berth at stake


Albert Roca said his side would not be making much of their one goal advantage as he expects Tampines Rovers to come all guns blazing at Bengaluru FC when the two teams clash at the Jalan Besar Stadium, in Singapore, on Wednesday with a place in the semifinal of the AFC Cup at stake.

The Blues traveled to Singapore on the back of a CK Vineeth goal in the first leg of the quarterfinal last week to give Roca’s side a slight edge. But the Spaniard believes Bengaluru have their task cut out. “The second leg is always a big challenge. It isn’t going to be easy given we have only the one goal to show for and Tampines will look to make things difficult in a bid to reverse the situation. But we have to be prepared for that,” said Roca while addressing the press in the team hotel, on Tuesday.

In what was the club’s first competitive game since winning the League in May, Bengaluru put on a fluent display at the Kanteerava last week, leaving Tampines to do the chasing for most of the game. In fact the Blues created enough chances to kill the tie at home but for some wasteful finishing which gives both sides everything to play for on Wednesday.

“I am happy because after six weeks we have tried to create a new style of play, which is not easy. We have good players and they have been really involved in trying to adapt to the new concepts. The players have shown in the first leg that they can adjust to the new style of play and I hope they can do the same here in Singapore,” said the Spaniard.

Meanwhile Tampines coach, Akbar Nawas said his side would be under pressure but urged his squad to give a good account of themselves. “The pressure is always there, no matter how much we say it isn’t. We need to step things up from the start and should not make the mistake of taking Bengaluru lightly,” he said. History too isn’t making things easier on the hosts who attempt to be the first side from Singapore to make the last four of AFC Cup since 2004.

The Blues landed in the country on Sunday and put in a session at the Jalan Besar on Monday. Much has been made about the rather hard surface at the Stadium but Roca chose to play it down when asked whether the pitch would have a role to play. “The surface is the same for both teams so there will be no excuses. We will have to adapt as quickly as possible. The climate is a little too humid for our liking but we have players experienced enough to manage the situation.” 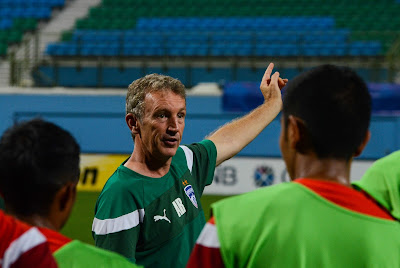 Posted by diegostrikes at 12:59 AM