U18 I-League: Bengaluru and DSK play out goalless draw

A dominant Bengaluru FC U18 Academy side drew with DSK Shivajians in their opening Group C game of the U18 I-League, at the Barasat Stadium, in Kolkata, on Firday. The Blue Colts dominated proceedings by giving little or no space to their opposition and extinguishing any signs of an attack from he Pune outfit in midfield.

The John Kenneth Raj-coached side had a chance to go ahead in the 30th minute when Amay Morajkar, with only the ’keeper to beat, shot the ball straight into his hands. Sourav TP too came close when he dribbled past his marker and had only the ’keeper to beat. His shot, however was wide off the mark. The Blue Colts’ final chance came from a corner in the final minute, when a ball from Vignesh V fell to an unmarked Sourav who was unable to hit the target.

The Blue Colts face Minerva Punjab Academy in their second Group C clash at the same venue on Sunday. 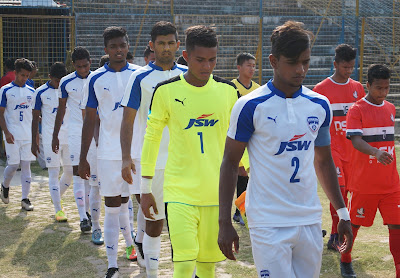 Posted by diegostrikes at 3:37 PM