U18 Youth League - Bengaluru down rivals Chennaiyin FC 2-1, seal top place to qualify for final round


Bengaluru FC came from a goal down to beat neighbors Chennaiyin FC 2-1 in a final round encounter of the Chennai-Karnataka Zone in the Under-18 Youth League at the Bangalore Football Stadium, on Tuesday.
The Blue Colts’ (20 points) sixth win of the campaign also meant they finished three points clear of second placed Ozone FC at the top of the Chennai-Karnataka Zone and qualified for the final round of the competition.
It wasn’t an ideal start for the Blues who conceded early in the first half when Chennayin striker Syed Suhail Pasha controlled an aerial pass and hammered home past Bengaluru custodian Tamal Naskar in the 7th minute.
Trailing by a goal in the first home game at the Bangalore Football Stadium, the Blue Colts pushed up fiercely in search of the equalizer. The hosts didn’t have to wait long as Biswa Darjee pulled them level in the 24th minute. The midfielder latched onto a clearance off Ragav Gupta’s cross to smash it into the goal from outside the box.
Bengaluru upped their game in the second half and created more chances than their rivals. Lalnuntluanga hit the post late on in the second half, before substitute Lalrinzuala Lalbiaknia finally completed the comeback in the 88th minute. The striker calmly converted from the spot after Ragav did well to earn a penalty and seal the game 2-1 in favour of the hosts. 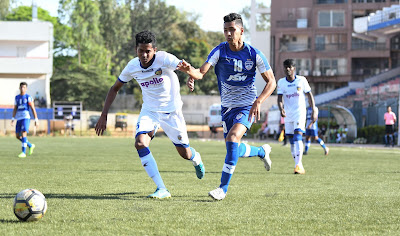 Posted by diegostrikes at 7:56 PM

Email ThisBlogThis!Share to TwitterShare to FacebookShare to Pinterest
Labels: Bengaluru FC, Chennaiyin FC, U-18, u-18 youth league, u-18 I-league