Bengaluru FC handed a contract extension to winger Boithang Haokip, the club announced on Tuesday. Haokip’s deal will see him with the Blues till the end of the 2020 season as he joins a list of players who have committed their future to the club, including Rahul Bheke, Juan Gonzalez, and Gurpreet Singh Sandhu.

Boithang made his debut against FC Istiklol at home in the 2017 AFC Cup, and has played a key role for Roca’s men since the turn of the year. The midfielder bagged two goals, one against Chennaiyin and the other against Transport United in the AFC Cup preliminary stages.

“I’m very excited to have signed for two more years with Bengaluru FC. They are the most professional side in the country and it’s an honour for me to be a part of this journey. We’re playing with the right intent and that’s something that drives me to continue working hard,” said Boithang. 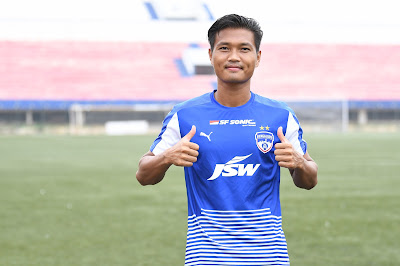 Posted by diegostrikes at 6:19 PM