One of Bangalore’s finest football product of last 80s who ruled the Indian football scene for several years, Carlton Chapman breathed his last early morning today at Philomena’s Hospital. He was only 49 years old and left his wife and two children.
Hailing from the football suburb of Austin Town, Chapman picked up the game in Nandan Ground, then moving to SAI Centre, Bangalore. Just when he started plying his trade for Southern Blues in local BDFA league, he was spotted and joined Tata Football Academy (TFA), Jamsedpur. He was in the first batch graduated from TFA.
Other than representing India, Chapman played for East Bengal, JCT, FC Kochin in his illustrious career as a player. Notable being a hat-trick that he scored for East Bengal against Al-Zawra, Iraq at the Asian Cup Winners' Cup in 1993.
In JCT, along with IM Vijayan and Baichung Bhutia, Chapman made a formidable attacking lineup, which was touted as the best club in India. In the Santosh Trophy, he represented Karnataka, Punjab, and West Bengal.
After hanging boots, he went to his alma mater and assisted Ranjan Choudhary. His long association with Royal Wahingdoh helped the team from Shillong to be a name to reckon with. Chapman was also associated with Sudeva Academy and Quartz FC in the capacity as a Technical Director.
“Shocking”, reacted Noel Wilson while talking to GCSStars.com, who is in Goa with Jamsedpur FC preparing for the upcoming edition of ISL. “A person I admired and followed during my early playing days”, added Noel.
Chapman’s colleague during his playing days in East Bengal and FC Kochin Raman Vijayan sounded emotional while talking to GCSStars.com from Chennai, “My god, hard to believe!’, he added, “Chap was my roommate for many seasons. On the field he was gutsy, always positive, and involved with the team. His never say attitude was infectious and his game was clean and simple."
"If you see most of the goals scored by Baichung, IM, or me are all from his assists. He was the best winger we got in our times. Looking at his speed, Rustam Akramov used him as a right back with much success.”
“I have never seen him falling sick in his playing days. He was a good coach too, he could have given back more to the game!”, concludes Raman. 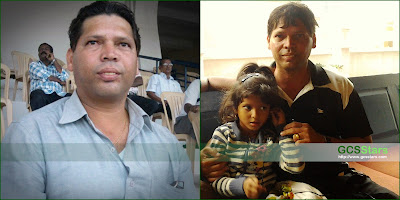 Posted by diegostrikes at 10:45 AM