Kickstart maintained their winning run after beating Hans Women FC 0-4 tonight in the Hero Indian Women's League at the Kalinga Stadium. Hans suffered another loss as they are yet to find winning ways in the competition this season.

Kickstart made a quick start to the game as they bagged the lead as soon as the 7th minute in the game when Roja got herself one on one with the Hans custodian and did no mistake to slot it home.

Thereafter the Karnataka-based side took the momentum of the game but failed to increase their lead as they were unable to capitalize on the chances created.

Before the lemon break, Kickstart got their best chance to double the lead when they were awarded a spot-kick but the former failed to turn into fruit.

After the breather Kickstart seemed to be with a better composure as they doubled the lead within the 48th minute. Babysana struck a screamer from yards away to make it 0-2 for her side.

Just at the edge of the hour mark Kiranbala Chanu made it 0-3 for Kickstart as she rightly utilized a howler from Hans custodian Tanvi Mavani. Minutes after the lead increased to 0-4 as substitute Lawmching found the net from distance in the 60th minute.

The high press from Kickstart rattled the porous Hans defense forcing too many mistakes inside the box. Hans made a change in their custodian side and this turned out to be a saviour for the losing side as they refrained from conceding more.

After this loss, Hans continues to remain at the bottom of the points table as Kickstart maintains the third spot with 6 wins in 7 games. 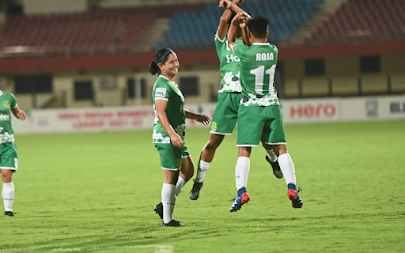 Posted by diegostrikes at 9:14 AM