Bengaluru FC Media
Bengaluru FC began their BDFA Super Division Campaign with a comfortable 8-0 victory over  FC, at the Bangalore Football Stadium, on Saturday. A hat-trick from Thoi Singh (42’, 45’, 50’, 78’) and goals from Rajanbir Singh (10’), Clarence Fernandes (21’), Sudheer Kotikala (58’) and Monirul Molla (73’) ensured all the points for Jan Van Loon’s side.
Bengaluru began the game on the front foot and opened the scoring early. Damaiphang Lyngdoh’s low cross into a crowded 18-yard-box found the feet of Rajanbir, who smashed it into the back of the net from close range to give BFC the lead. Twenty minutes into the game, a well-worked corner routine went in favour of the Blue Colts who capitalised and doubled their lead. Amay Morajkar’s cross found Rajanbir, who tapped it into an empty net to make it two.
The pace of the game slowed down with both teams keeping the ball in the middle of the park, but Bengaluru switched gears and bagged two more goals in the last five minutes of the first half, courtesy of Thoi.
Into the second half, it took BFC just five minutes to score another goal as Thoi completed his hat-trick. A sublime through ball from Amay Morajkar from the center of the field, found Thoi who kept his composure and slotted it past SK Sadekuddin to make it five.
Sudheer got in on the action just eight minutes later with a powerful finish from just outside the 18-yard-box to make it six. Substitute Monirul made a huge impact in the game and scored with a sublime volley before setting up BFC’s eighth goal. Molla’s pass found Thoi, who scored his fourth with an easy tap-in.
The Blue Colts next face Rebels FC on 31st August, at the same venue. 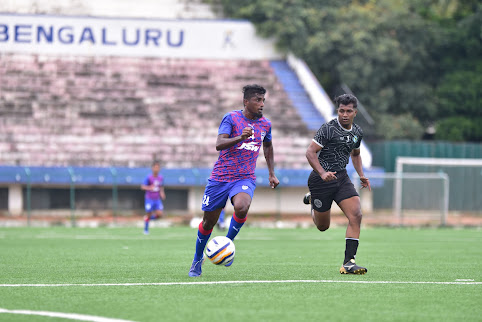 Posted by diegostrikes at 8:32 PM