Parikrma boys defeated South United 2-1 in the South United FC-hosted BDFA A Division Knock-out Football Tournament, a precursor to the BDFA A Division League.
The tournament was played by all 10 BDFA A division teams. The teams were divided in 4 goups with the top teams from each group making it to the semi-final. In the final played today at the RBANMS ground (managed by South United FC ),  Parikrma boys defeated hosts South United 2-1.
It was South United who took the lead from a Bilal Shamshudeen goal in the 20th minute. Neil Joseph equalized for Parikrma in the added time of first half. Neil was again seen in action in 60th minute scoring the winning goal for Parikrma. 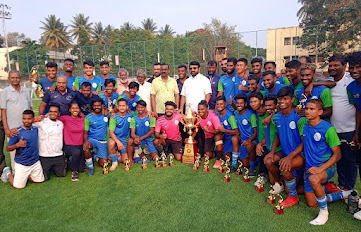 Posted by diegostrikes at 7:27 PM