Karnataka lose to Meghalaya in Khelo India, advance to semis as group runner-up

Karnataka boys lost to the group winner Meghalaya 2-1 in the ongoing Khelo India Youth Games at Indore today morning. With 2 wins and a loss, they qualify as the second placed team to final four. Karnataka will play against Group A winner Punjab, who progressed to semi-final after completing an all-win record in their group. The other semi-final game will be played between Meghalaya (7 pts) and Group A runner-up Kerala (6 pts).
Karnataka took an early lead in the game, with Abhishek proving his goal scoring mettle, taking his goal-scoring tally to 4 in this edition of Khelo India. Meghalaya restored parity in the 40th minute via Cannyson Kharnaior. After changing ends, Blanangshngain Khongsdam, who came in as a replacement for Fashioning Syngkli in the first half, scored the second goal (68').
The semi-final will be played on Wednesday, February 8. 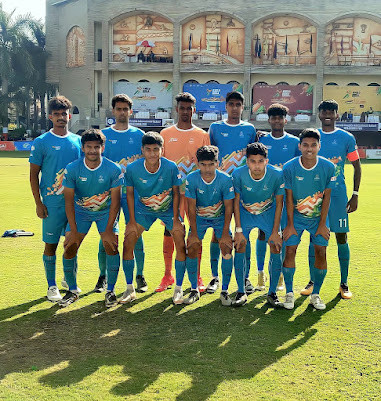 Posted by diegostrikes at 1:42 PM No comments:

In the other Group B game, Bengal and Meghalaya ended in 1-1 draw. Karnataka now top the Group B table with 6 points and move to semi-final round, followed by Meghalaya (4).

In group A, Punjab made to last four with back-to-back win. The second semis spot in this group will be decided tomorrow between Arunachal Pradesh and Kerala; both teams - with a win and loss are at 3 points. 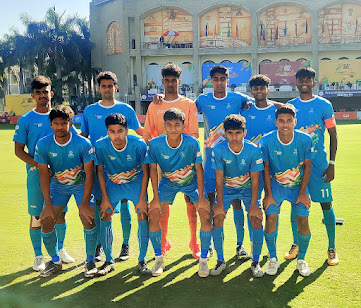 Posted by diegostrikes at 6:10 PM No comments:

Vishal R will lead the 20-member Karnataka state football team that will take part in the Khelo India Youth Games to be held in Indore, Madhya Pradesh from February 1-10. Karnataka will take on West Bengal on Feb 2 followed by matches against Odisha (Feb 4) and Meghalaya (Feb 6) in the preliminary round.

Karnataka managed to send a strong squad comprising of several players plying their trade for clubs in BDFA League league - 7 from Super Division, 2 from A Division, and 3 from B Division. 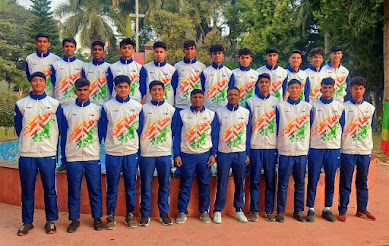 Posted by diegostrikes at 6:24 PM No comments:

In a press conference hosted by the Karnataka State Football Association (KSFA), NA Haris, Vice President, AIFF and the President of KSFA announced the revival of the historic tournament, which started in 1938 and went on till 1993.

In line with AIFF's aim to revive some heritage events, the KSFA will be organizing the Stafford Challenge Cup at the Bangalore Football Stadium from February 23, 2023, onwards. A total of 16 clubs will be invited and they will be clubbed into four groups. The four clubs in each group will play a round robin format in their respective groups and the top team in each group will qualify in the knockout semi-finals and final. The final is scheduled for March 6, 2023.

Talking to the media, M Satayanarayan, Secretary, KSFA mentioned about tactfully utilising the period between final round of Santosh Trophy, which is ending on February 20 and I-League 2 2022-23, which is starting early March.

“We had very less time this year, our plan is to include the Stafford Challenge Cup in the AIFF football calendar next season. This will help us in better planning to organize the event get top teams”, said Haris.

Developmental teams from ISL and I-League like Bengaluru FC, Chennaiyin FC, Gokulam Kerala, Dempo, and Sreenidhi FC along with I League-2 participants, ARA FC from Ahmedabad, FC Bengaluru United, and Delhi FC will be seen in action.

Other teams from outside the state of Karnataka include Kenkre FC and PIFA from Maharashtra, International FC from Punjab and Kerala United. The other four local clubs from Bengaluru are Kickstart FC, Roots FC, MEG, and HAL. 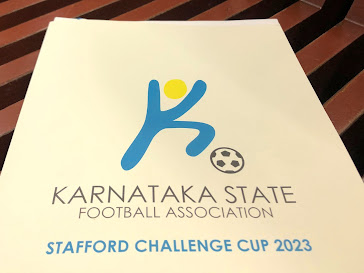 Posted by diegostrikes at 5:20 PM No comments:

KSFA organised a homage event near the famous statue of Pele in Gowthampuran to mark the passing away of the football legend. The event took place today evening, 5.30 pm. 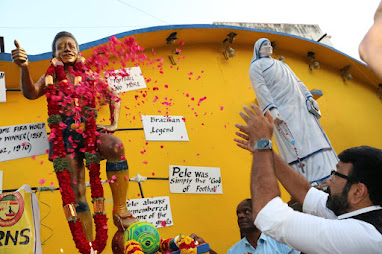 Posted by diegostrikes at 8:50 PM No comments: