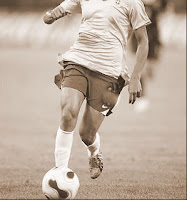 KSFA today announced the 20-member squad for the Senior Women’s National Football Championship. Imphal, the capital of Manipur will host the 18th edition from March 7 to 25, 2010.

Karnataka is placed in Cluster II along with Rajasthan and Orissa. They play their first match on March 9 against Rajasthan and next match against Orissa on March 11.

Chitra Gangadharan (SAI) will be the coach and Hemalatha HS will be the manager of the contingent.
Posted by diegostrikes at 12:32 AM