Mohammedan waste points again, out of contention for division 1

The Kolkata powerhouse could not hold on to the 1st half one-goal lead and split points with Oil India. With this draw they are mostly out of race for qualifying next season’s I-league division 1. Vasco thrashed Malabar United 4-0 in the other match and kept their hunt alive for division 1.

Mohammedan took the field minus 2 regular players, Zoheb and Babin due to double booking. They meant business and started attacking from the beginning.

In 21st minute, Oil India GK somehow manages to avert defender Sanjay Parte’s long ranger for a corner. Satyajit Basu takes the corner, Amrit Pal Singh who was out of injury and playing his first match came from nowhere, and heads the ball to the goal.

10 minutes later from a nice thru from Theo, Edu speedily enters into the Oil India box from the right side and back-heels to Theo. The later over-ran him and fails to covert from a nice move.

Mohammedan medio, Satyajit Basu, who didn’t have a decent game today, committed a big mistake in the 33rd minute, he chest-traps to clear the ball from defense, an opponent player ball picks the ball from the open area just outside the box, and passes to foreign striker Waheed. Waheed shots the ball outside the crossbar. 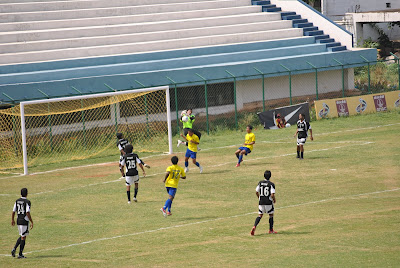 Oil India kept attacking in the later part of 1st half, keeper Nassem Akhtar kept them at bay by with some splendid saves. 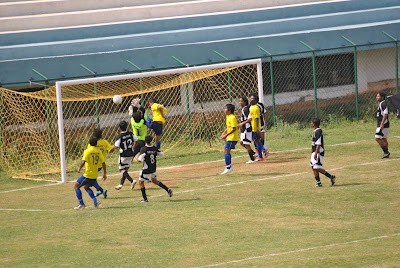 Mohammedan defense never looked settled and the oilmen took the advantage to score the equalizer in 70th minute from Zaidin Hmar.

Soon after the goal, veteran striker Dipendu (replacing Theo) and Nilendra Deewan was brought in to propel Mohammedan attack.

Edu, who looked focused, had a good game today. He engineered several attacks from the left wing, however, his shots were either saved by the keeper or missed by a whisker.

Everybody thought that Mohammedan Sporting should qualify to the next round, it has been a pathetic display by them so far!