HAL got the first taste of defeat in the I-League division 2 final round by loosing to ONGC 2-1. All the goals were scored in the first half. ONGC took the lead in the 3rd minute of the game, HAL were quick to restore parity through Satish Kumar jr. ONGC netted another one in the 32nd minute and sealed the fate for HAL. In the 2nd match of the day, two bottom-ranked teams, Sesa and NISA played 1-1 draw. 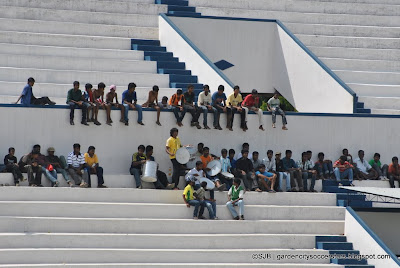 It was a fight between the top teams. The spectators of the city team came in good numbers, they played drums to encourage the players throughout the match. However, HAL disappointed them by missing a penalty, missing easy chances, and displaying some aimless football in the second-half.

Nigerian striker Babatunde opened ONGC’s account in the 3rd minute - he receives a pass left to the left side of the box and intelligently places the ball to the far post, out of keepers reach.

HAL tried to hold the game in midfield, the equalizer came from a beautiful thru ball from Jotin Singh – Rajendra Prasad who was marching ahead from the right flank receives the ball and floats a center, Fredrick misses it, but Satish Kumar jr who was unmarked at the far post makes no mistake in putting the ball to the goal.

ONGC took the lead again, thanks to some shoddy work by the HAL defense - Jai Kumar fails to clear the ball cleanly, ONGC winger Naresh catches the ball, and takes an accurate long ranger. 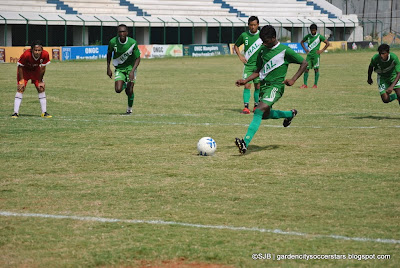 HAL should have equalized in the early 2nd half – Nigerian striker Fredreick was brought down by an ONGC defender inside the box. Referee didn’t hesitate to declare a penalty. However, skipper Rajendra Prasad’s shot to the left side was easily saved by keeper Bilifang.

HAL was trying hard to get back into the game, but some good defending by ONGC did not make that happen. Sathish Kumar jr who earlier missed few chances was heavily marked and could not crack the ONGC defense.

The last 20 minutes were marred by some time-wasting tactics employed by ONGC and some aimless football by HAL.

ONGC remain the only team unbeaten so far and virtually booked their place in the 1st division. After loosing points today, HAL is in the 2nd spot with a point less from the leaders.