HAL inched closer towards gaining a spot in next season’s I-League division 1. Today, playing against newbie NISA, Manipur at the Bangalore Football Stadium, they defeated 2-1. Brothers Karthigeyan and Satish Kumar jr scored for HAL and Thomas Singh scored the only goal for NISA. They now only need a draw to qualify for the I-League division 1. 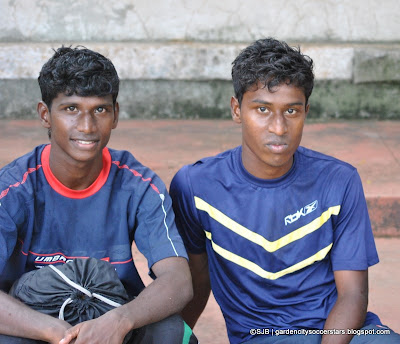 HAL could not field their 2 foreigners, striker Fredrick and defender Femi was kept out of the match due to double booking. Fredrick’s absent meant Xavier coming in the forward position and Srikanth playing in deep-defense.

1st half failed to bring good game. With the field relatively heavy due to rains in last couple of days, HAL struggled to control the game. Defense looked feeble today with NISA penetrating several times.

After changing ends, HAL looked more organized. They made a skillful attack in the 1st minute. 3 minutes later, Karthigeyan’s powerful long ranger from a Jotin Singh pass went past the NISA keeper. HAL looked a much better team in this period.

Wily Xavier tore NISA’s defense in the 64th minute, however, keeper Premkumar Singh displayed good reflex and saved a sure goal. It was Xavier again, who missed the easiest chance of the day in the 73rd minute – alert Murali taps the ball from a defensive miss pass and gives it to Jotin on the left, Jotin on entering inside the penalty box passes to Xavier, the later dribbles one defender and finds the keeper, rather than placing to the far post, he takes an easy shot to the keeper.

This miss proved costly for HAL as the Manipuri team scored the equalizer in the next minute. NISA continued attacking after the equalizer, but caught repeatedly. Poor finishing prevented them from causing anymore damage to HAL.

In the 87th minute, Satish Kumar jr, who had a reasonably good tournament had an off-day as he displayed poor finishing and missed several scoring chances today. However, he did for his team when it matter the most. Coming from the right side, Satish dribbles few defenders, and takes a diagonal shot that goes beyond the reach of the keeper.

It was a big relief for the HAL supporters, who again turned in good numbers today.

The Goan team amassed full points by bludgeoning Oil India 4-0. Striker Koko Sakibo scored the 2nd hat trick of the final round. With this win the Goan team stays in contention for qualifying in I-League division 1. They still need to win their final round match and hope that the top two teams HAL and ONGC waste points in their coming matches.