It has been a decent outing so far for him, tried to utilize whatsoever chance he got during the practice matches at Siliguri, and scored 2 goals.

Satish primarily played in the middle, little below the strikers, strengthening the mid-field, and lending support to the strikers.

Coach Stanly Rozario was asked about how he see the new players breaking into the team. Talking to the GardenCity Soccer Stars, the Bangalorean sounded positive.

“We have to play 50 matches in a season. I’m talking about minimum number of matches - 16 in KPL, 26 in I-league, plus Federation Cup, Durand Cup, IFA Shield, et al. No way that a single player can play that many matches”, pauses coach. 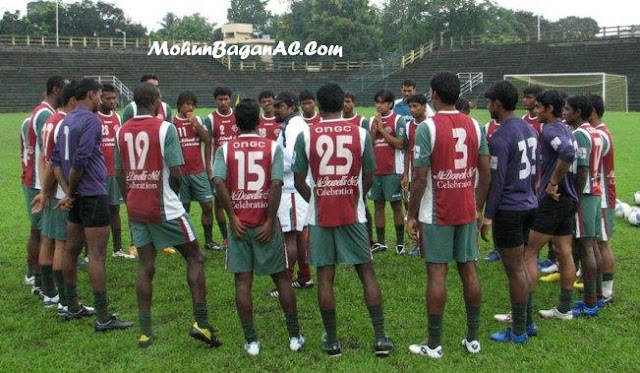 “There will be time when the players will be unavailable thru off-form and other matters, leaving aside the other important aspect, which is injury. So, every one will get a chance to show their mettle. It’s then, up to them perform, and rise in the big occasion.”

Regarding SatishKumar jr, this is what Stanly opines, “Satish like the other former Bangalore players played in Kolkata, is skillful. He is mentally strong and has a good game sense.

“He has a bright future ahead. I am sure he will be the flag bearer of the legacy set by the other great players from the garden city.” Said coach.

Knowing that it will be difficult to get into the star-studded lineup, Satish sounded genial, “I need to perform consistently well to get into the team. Hopefully, KPL will give me a chance to do that.”