When will HAL form their team?

With just a day left to register players for transfer window one of this season, I-league division I entrant HAL is yet to come-up with a team list. After making several attempts to get the team composition over past couple of weeks, coach Muralidharan again requested to wait for a day.

This is a definite slackness from the part of HAL management. It is a well know fact that there are several shortcomings for a public sector team. However, they had a good 3-months window to close on quality players of their choice. Rather than going in that path, they took things easily, and conducted a trial-cum-practice sessions for last 2 week.

As expected, the quality of players seen in the trial were miserable as the top ones already got their club. So HAL had to content themselves by selecting from a below average lot, who primarily came into the fray after not managing to get a club elsewhere.

The team management can always argue about the bureaucracy and protocols involved in running a sports team for a public sector organization like HAL. However, they should take a leaf out of another I-league division I newcomer, ONGC. The oil major had a vision right from the beginning and managed to set a formidable side.

What else can you ask for when ONGC have picked 3 core players from HAL?

Who are the outstation players?

Though the first 3 players came from division I club, they were barely seen playing regularly for their team. Last year, Kulothungan played few I-league matches with minimal success.

The goal keeping position will be an all-Kerala affair, with keepers taken from Malabar United and Viva Kerala. Also, HAL is inducting taken few players from Salgaongar and Indian Bank.

Well, the tried-and-tested in Bangalore Fredick Ockwagbe and Abdulla Hamza. How well they perform in the national-level is yet to be seen. The latest of the coup is in the form of Rohit Chand, a junior international player from Nepal, who represented his country in the AFC U-19 qualifiers. The 4th foreigner position still remains empty. HAL might fill the vacant slot during the second transfer window.


How about the local talents?

The local players got the raw deal for sure!

It was quite evident that the players on HAL roll, Xavier VijayKumar, Rajendra Prasad, and Satish Kumar Sr will be automatic choice. Midfielder J Murali makes to the team. Veteran striker and former international RC Prakash makes a comeback after maintaining a low profile for couple of seasons. 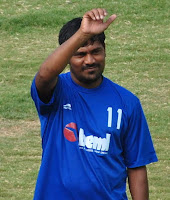 What is baffling is the shoddy treatment given to a host of local players. Remember, these talented local players helped HAL to regain lost glory. Instead of rewarding them by extending their contract, they were told to join the practice session. These guys wanted to be a part of this Bangalore team, so they continued practicing without asking for a contract.

Doesn’t stop here. These players were again told to join the trials and after attending trial for two weeks they were shown the door. Moreover, this happens at the end of the transfer window and they have no option to choose a club.
Club management could have handled it in a better way by informing them in well advance. Few players got offers from Goa and Kerala. However, they got verbal assurance hoping to continue with the same club and didn’t went ahead with it.

After playing under the bar without missing a single match last season, experienced custodian Amar Deb was left in the lurch. On last Firday, he was told by the club authority that they don’t need him, got better quality keepers, and can only include him if he aggress to play in the same remuneration he got last season.

And guess what, Amar was promised a double salary hike after HAL got promoted in the I-league division I. To be precise, the former keeper of East Bengal, Amar has played 32 games in the last season and many times risking injury.

He has been reliable under the post and helped HAL in several occasions, be it the Manorama Gold Cup, Federation Cup, or I-League Division II. 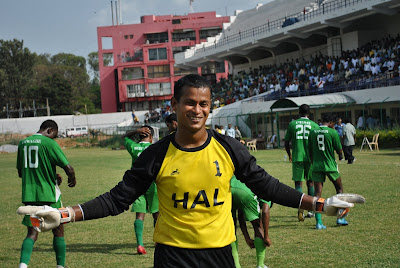 A jubilant Amar after taking HAL to I-league Division I
He was going thru the turmoil when he got a second lease on life. Kolkata giant Mohun Bagan summoned him after their under-19 keeper got injured. Amar left for Kolkata on last Sunday and he has submitted his inter-state transfer application yesterday.

Amar is glad to be a part of Mohun Bagan. He might not be an obvious choice for the starting line-up, but he is confident of his ability to put a good show in practice, and make it to the team.
Posted by diegostrikes at 4:47 PM