HAL return in style in I-League, JCT pay the price of being overconfident

A perfect start one could have ever imagined!
Riding on an early goal from the wily Xavier Vijaykumar, HAL made a staring return in the big stage of Indian football. After a brief hiatus in I-League, the minnows from Bangalore have done it all themselves. 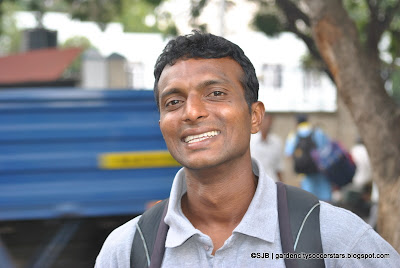 “Unknown quantity is always a better choice than the known”, who else will be thinking that other than R Thyagaraj, the coach of the victors. Coach sounded very tentative when GardenCitySoccerStars met him less than a week ago during the practice session, which was quite apparent, as he was just a few weeks old in the office.

Talking to GardenCitySoccerStars from Gurgaon, coach was joyous in saying, “Glad that we have garnered 3 full points from an away game. Our boys put in a combined effort, played a great game, and all credit goes to them!”
HAL returns to Bangalore on Sunday and then they move to Kolkata to play against Mohun Bagan on Wednesday, December 8.
The lone goal of the match came in the 13th minute. S Muralidharan passed a long ranger to Xavier, chasing the ball down the right flank, Xavier dribbled one defender and moved into the penalty box, where he fooled another defender with his trademark left leg dribble, and then placed the ball to the goal.
HAL thoroughly dominated the first half, missing as many as 3 sitters. Playing with only one foreigner, JCT tried hard in the second half, however, good defending by HAL thwarted their plan.
Xavier was at its best even after the match, “JCT underestimated us - they had no preparation at all, and took us too lightly!”
“Even they were confident that a thin-framed player (like me) could not score that goal”, Xavier adds in jest.
5 more away matches to play in the month of December. They have made a great start, now it’s all about maintaining composure and momentum.

Posted by diegostrikes at 12:18 AM