Truly keeping-up to the confidence bestowed by their coach, Indian Arrows, the brand of desi rookies, exemplified an outstanding performance, and thwacked HAL 4-0 in their away encounter played at Sree Kanteerava Stadium today. Jeje Lalpekhulua (38’) Jewel Raja (50’), Shilton D’Silva (66’), and Malsawmfela (80’) scored the goals for the arrows. 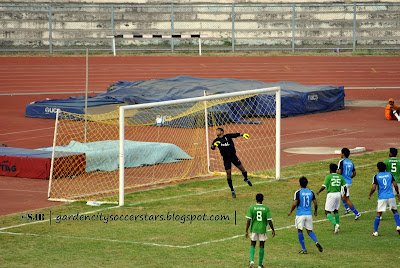 Lalrindika Ralte’s beautiful free kick touched inside of the horizontal cross piece and came out.
HAL looked like a depleted team with defense failing to settle down. Absence of the regular defenders, Femi (central), Rohit Chand (left back), R Sreekanth (right back), were truly felt. The replacements were not up to this level, which is quite apparent by the result of the match. 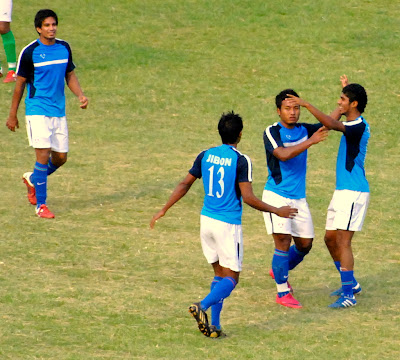 1st goal celebration
The goals were outcome of the lack of understanding shown by the defenders. The numbers could have been some more, until keeper P Pramod’s well-anticipated saves came in the middle. 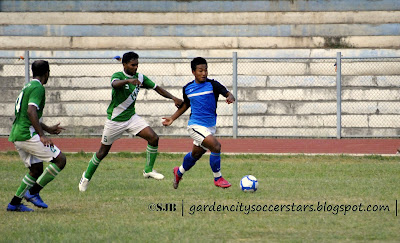 Trademark Jeje run, he means business, attacking in the 2nd half
Also, to be questioned is the player replacement done by HAL. The midfielders, skipper J Murali and James Singh jr. were replaced in a spate of few minutes, leaving no one to play the holding game. Ankit Sharma was drafted in the mid-field, the position he is not used to play. 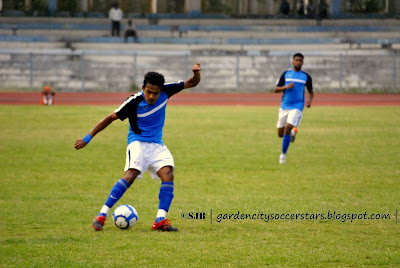 Crafty player is Jewel
Quite evident that the team has minimum bench strength, management should realize that playing a marathon 26-round league requires some good reserve players. Every time they missed a player form the regular line-up, team has struggled.
In the post-match conference, HAL captain J Murali cited the absence of crucial defenders for today’s result. Also, the players came as replacements were not confident enough to take on the opponent. 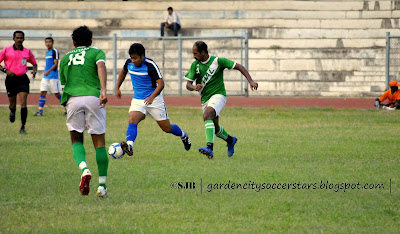 Fela came-in and scored a quick one
Indian Arrows coach Desmond Bulpin, stressed on confidence. He was confident about his team right from the beginning of I-league, and things are getting better. He seems to be confident enough to win the remaining I-League matches and stand at the top-half of the points table. 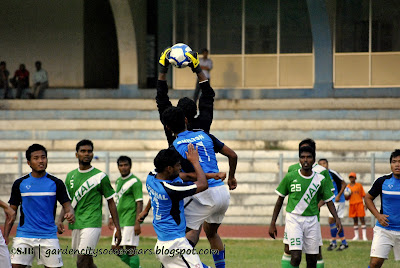 HAL keeper impressed one and all
With a match less played, Indian Arrows now replaces HAL in the 9th spot in the league standing. HAL needs move on and gather full points in the next two rounds, which is against the bottom-ranked teams.
Posted by diegostrikes at 1:28 AM