I-League returns following brief hiatus and this time the hosts take on the Indian Arrows.
The stage for Round 20 is all set as the confident young turks, coached by Englishman, Desmond Bulpin is eager to take on the Aircraftmen at the later’s backyard. At the earlier encounter, the former got the better of HAL, winning 2-1.
Also, this should be a good-enough motivation for HAL to get the better of their opponent, who pulled a last-minute goal to level parity against Chirag in their last encounter. However, HAL will be missing their two most consistent performers of this season, central defender, Femi and side back Rohit Chand, both sitting out due to double yellow card.
Midfielder Gautam Debnath will be filling Rohit’s void and Jai Kumar will be fielded for Femi. Good news is that James Singh jr. is recovered from a long injury and he will be playing in Debnath’s position. 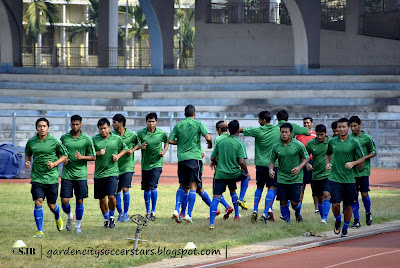 Arrows warming up before they take on HAL
Indian Arrows might have opened their I-league campaign in a poor note, but they have recovered well, and standing in 10th position, just below HAL in the standing. Decent result for a young team with an average age of 19 and ½ years! 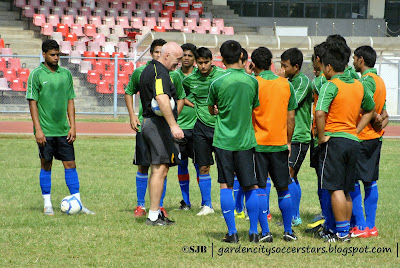 Wards under the watch eye of Desmond Bulpin
According to the English coach, “couple of more years, and you’ll see the boys going in places.” Definitely something that we can expect as few of his players played for India seniors in the recently concluded AFC Challenge Cup qualifiers.
Posted by diegostrikes at 12:51 PM