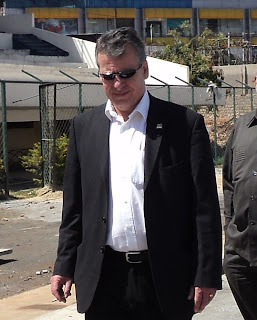 The FIFA turf inspection committee led by Dr. Eric Harrison reviewed the newly laid artificial turf of the Bangalore Football Stadium and expressed satisfaction, per Harrison, the pitch is of high standard.
The official certification will happen when the FIFA’s turf testing team certifies the pitch. However, testing can only happen after the monsoon season is over.  Certification will enable Bangalore Football Stadium to host international matches.
Earlier, Dr. Eric Harrison had visited the facility on September 17, 2010. Later again on February 1, this year, as a part of FIFA’s inspection process, he inspected the pitch of the stadium.
According to FIFA pitch consultant, it is ideal to play during the cooler part of the day, morning or evening, to avoid heat exhaustion as an artificial turf generates heat as against moisture by natural grass. If a match is played in the noon, better to water the turf properly, just like that way it is done in a hockey field.
Maintaining the ground will also be a part of this FIFA project. Though maintaining an artificial turf is much easier than a natural turf as it only takes 3-4 hours in a week. The local grounds men will be given training by the FIFA approved vendor, Greenfields.
Pitch maintenance goes online as Greenfields has set up an online portal. This portal will monitor the maintenance work of the turf. The staff responsible for maintaining the turf from the association will be entering the data online every week, where the Greenfields engineers will be monitoring the progress of the work routinely.

Posted by diegostrikes at 11:50 PM