As the I-League II Division Qualifiers comes to the penultimate day and the qualifiers are almost decided, let’s take a look at the performance of the only Bangalore connection this time, KGF Academy.

KGF Academy might have failed to qualify this time, but they ended their campaign on a high note, especially, after losing first four rounds on a trot.

Coach Raman Vijayan always maintained that his boys were losing, despite of being a better side on the ground. The coach said, "Team is playing well, but we're missing chances, and at the end conceding goals".

"Everybody is praising our team, but we are losing because of lack of match exposure." added Raman.

KGF Academy lacking big-time match exposure - something I anticipated much before. Conceding late goals proved to be a serious area of concern, and that happened in two matches.

Well, we all hoped his team will continue playing well and most importantly get some points. 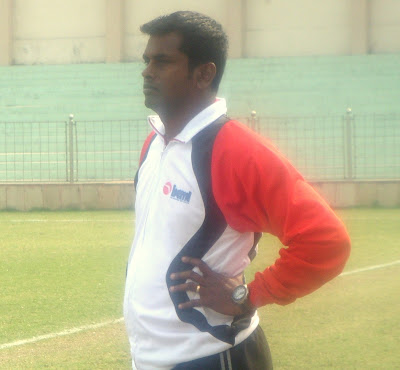 Clinical striker, Okoro, who turned out JCT few seasons back is one of the foreign players that KGF Academy have in their ranks.

Also, Okoro, played for a super division team in Kolkata, is all praise for the KGF coach, “Very nice coach I’ve ever meet in Indian football. He is really nice to everybody, we’re like brothers and friends.”

“With this coach, the team will can go very far”, adds the Nigerian.

Posted by diegostrikes at 6:38 PM