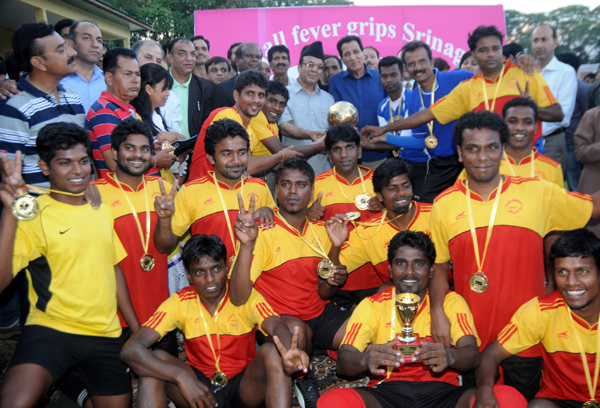 Karnataka Postal Department won the All India Postal Football for the third time in a row. In the final, played at the Bakshi Stadium, Srinagar today, Postal, a BDFA Super Division team defeated Kerala Postal team 1–0. Arun Pondey scored the winning goal at the 70th minute of the match.

The tournament, hosted for the first time by the Department of Posts, Jammu and Kashmir Circle, Srinagar is kick started in Srinagar on August 25.

The tournament was played on a league-cum-knock out basis, where the teams were divided into two groups, and the top two teams from each group qualified for the knockout stage.

In the league stage, the Karnataka Postal boys defeated West Bengal 3-0 and Haryana 7-0. In the semi-final they defeated Uttar Pradesh 2-0.

Posted by diegostrikes at 7:44 PM