Bengaluru FC and India Captain Sunil Chhetri and Australian striker Bengaluru FC failed to convert second-half penalties while Chidi made merry off a goalkeeping gaffe for his first and a powerful long ranger for his second. The win propelled East Bengal to four points from three matches while Bengaluru FC remained rooted to the same number of points from three outings.

Sporting Clube de Goa advanced from Group B with six points and will now play Dempo in the second semifinal on Thursday, January 23, 2014. In the other semifinal, Mohun Bagan will play Churchill Brothers on the same day. Both the matches will be played at the JLNS stadium in Kochi.

With Sporting Clube getting the better of Rangdajied United in the first kickoff of the day, Bengaluru FC needed a win to progress to the last-four stages and on the other hand the defending champions had only pride to play for.

Both the teams went for glory from the very beginning of the match. In the 7th minute East Bengal’s Japanese playmaker Ryuji Sueoka failed to connect a delightful cross from Shylo Malsawmtlunga.

Chidi combined well with Shylo three minutes later to get behind the Bengaluru FC defense but his powerful left-footer sailed over the bar.
Bengaluru FC thought they had their noses in front when Sean Rooney nodded in from close but the Australian’s goal was disallowed because one of his teammates was in an offside position.

The Airtel I-League leaders had another good chance to take the lead when Captain Chhetri swept in a low cross for Rooney who miscued his header.
The best chance of the first half came to East Bengal just at the stroke of halftime. Chidi Edeh latched on to an unconvincing clearance by Bengaluru FC and let loose a stinging effort that fizzed inches over.

After the break though, it was all East Bengal as they capitalized on two penalty misses by Bengaluru FC.

First it was Sunil who was brought down by Arnab Mondal after the latter failed to clear the ball in defense and the India Captain latched onto his mistake and darted forward inside the box.

But he was tripped by a backtracking Arnab which led a penalty. Much to the despair of the full house who was cheering Sunil every time he had possession, the Indian Captain hit his spot kick straight at Gurpreet Singh.
Hardly had Bengaluru FC regrouped from the penalty miss, their custodian Pawan Kumar let in a regulation save from Chidi’s 30-yard jab at goal. The ball rolled into the net beneath the outstretched arms of Pawan.
Chidi scored again few minutes later, letting loose a rasping 30-yard right-footer from Moga’s deflected attempt.

Sean Rooney capped a bad in office for Bengaluru FC’s when he muffed his effort wide from the spot after earning the penalty.

East Bengal could have walked away with a three goal win had Moga's effort from a free kick not come off the crosspiece. 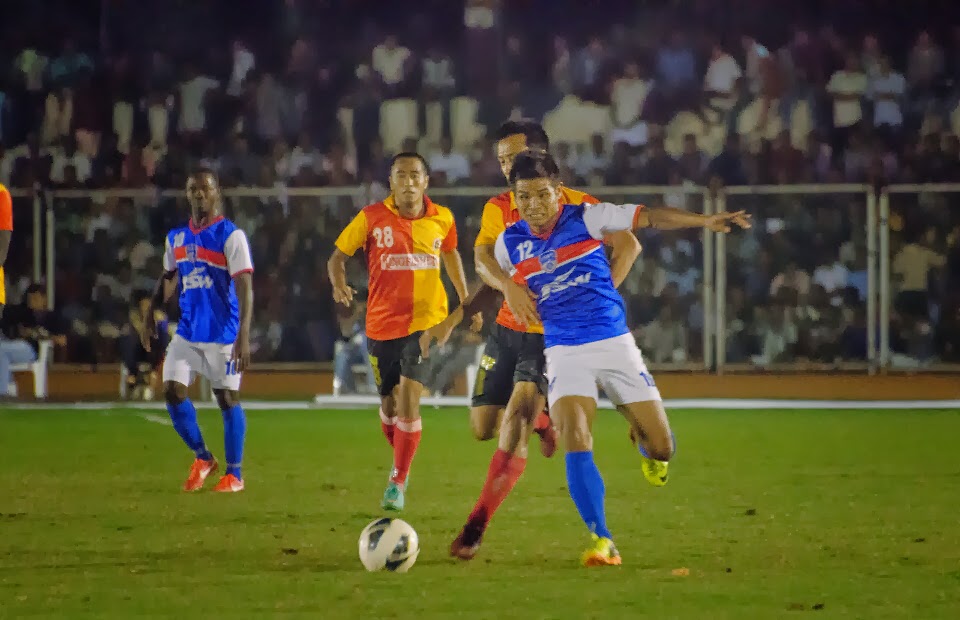 Posted by diegostrikes at 12:04 AM