The Indian National squad left for Bengaluru from New Delhi for the Preparatory camp ahead of India’s back to back Russia 2018 World Cup Preliminary Joint Qualification matches against Oman and Guam respectively.

The squad proceeded to Bengaluru after some intense training sessions at the Ambedkar Stadium in the Capital. The list would be further pruned to 23 for the two matches.

India play their first match at the Kanteerava Stadium in Bangalore on June 11 while the next match against Guam will be played in Guam on June 16.

India have been clubbed in Group D along with Iran, Oman, Turkmenistan and Guam. 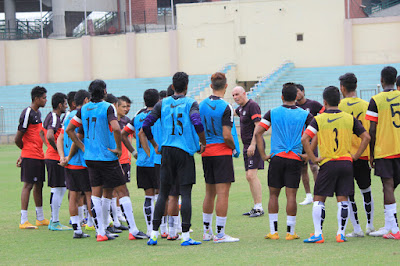 Posted by diegostrikes at 5:34 PM