Failure to put simple chances away came back to bite Bengaluru FC who were handed a 2-0 defeat to Abahani Limited Dhaka in a Group E game of the AFC Cup at the Bangabandhu Stadium, in Dhaka, on Tuesday. Late goals from substitute Saad Uddin (87) and Rubel Miya (90+2) saw the Blues suffer their first defeat in the competition this season and Roca’s men now have their task cut out if they are to make the knock-out stages of the competition.

Roca, having rested key players on the weekend, handed starts to Eugeneson Lyngdoh, Sunil Chhetri, CK Vineeth, Cameron Watson and John Johnson. With a 3-5-2 system that saw Harmanjot Khabra and Nishu Kumar deployed as wing-backs, the Blues looked to contain the Abahani attack while pressing for the opener.

The Blues went at the Abahani defence from the get go, winning a corner in the very first minute, while applying pressure on the home side throughout the first half. John Johnson’s early header went straight at Abahani ’keeper Sahidul Sohel before Nishu’s run and strike failed to hit the target at the half hour mark.

Bengaluru’s best chance of the half came when Eugeneson Lyngdoh’s corner met the head of skipper Sunil Chhetri but the effort, once again, was easy pickings for the Abahani custodian.

Abahani, for their part, looked far more comfortable than the nervous side that went down 2-0 to Bengaluru away from home. Rubel Miya left Nishu behind to send a cross in but Mohammad Nasir’s effort was wide of Amrinder’s frame. The sides went into the break with all to play for but it was the Blues that came out with more intent in the second half.

Roca sent on Alwyn George for Vineeth while Daniel Lalhlimpuia replaced Nishu in a tactical change. Switching to a back four to add to Bengaluru’s attack, Alwyn pulled the strings behind Lalhlimpuia and had his first shot moments after the restart.

Both substitutes had big chances but Alwyn was guilty of not putting away the easier of the two in the 72ndminute. Chhetri did well to keep the ball in play down the left and served the perfect cut-back from the tightest of angles only to see Alwyn blaze his shot over from close.

Bengaluru were handed a big advantage eleven minutes from time when Mohammad Nasir’s deliberate hand-ball earned the Abahani player his second booking of the game to reduce the hosts to ten men. Looking to make most of the extra man, Roca’s final substitution of the night saw the Spaniard throw in striker Len Doungel for Khabra.

But it was Abahani who landed the killer blow in the 87th minute when Saad Uddin tapped home a cross on the volley to give the hosts a lead that Bengaluru couldn’t do much to erase. The Blues then conceded a second in additional time when goalkeeper Amrinder Singh, high up on the pitch to put the ball back in play from a Bengaluru corner, was robbed off the ball by Rubel Miya who ran a few yards with it before chipping into an empty goal from distance.

Earlier, in the Group’s other game, Maziya S&RC knocked Mohun Bagan out of the completion with a 5-2 result in the Maldives to make the race to the knock-out stages one that goes down to the wire.

Bengaluru travel to Cuttack next, where they begin their Federation Cup campaign with a clash against Shillong Lajong at the Barabati Stadium, on Monday. 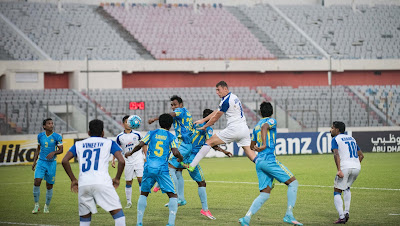 Posted by diegostrikes at 2:16 PM