Albert Roca asked his Bengaluru FC side to brush aside the hurdles of a packed schedule and humid weather conditions and train their focus on chasing Federation Cup glory as the Blues open their campaign with a clash against Shillong Lajong at the Barabati Stadium, on Monday.

Stacked alongside reigning champions Mohun Bagan, DSK Shivajians and Lajong in Group B, Bengaluru have been building an impressive momentum ahead of the competition that guarantees the winner a slot in the AFC Cup. “We ended the League season on a good note and except the blip in Dhaka, we’ve done well in the AFC Cup too where our fate is firmly in our hands. Surely, the Federation Cup will be a whole new ball game but we’ve been doing things correctly and if we can manage the situation of the schedule and the heat, we should be alright,” said Roca on the eve of the game.

The Blues have been buoyed by the arrival of striker Cornell Glen who joined the squad in Cuttack after a week of working on his fitness in Bengaluru. Incidentally, Glen has previously turned out for Lajong and Bagan and it needs to be seen the role Roca hands him in the tournament.

Bengaluru, who did the double over Lajong in the League this season, have faced the side from the hills just once in this competition previously and came away 1-0 winners on their way to lifting the title in 2016. “We’ve beaten Lajong twice this season but this competition a clean slate for everyone and the margin for error is very less. Two good weeks of football and you could be representing the country in Asia which is going to give belief to every team in this competition. It’s going to boil down to how clinically we take our chances,” added Roca.

Two sides from each group of the Federation Cup qualify for the semifinals while the Blues will have an extra game to play as they face Mohun Bagan in an AFC Cup Group clash on the 17th.

The match between the Bengaluru and Lajong FC kicks off at 4 pm and will be telecast live on Ten 2. 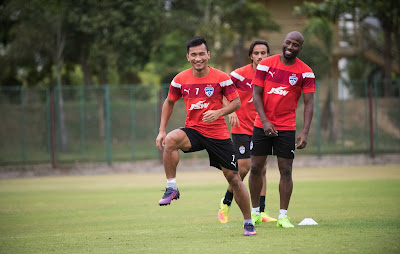 Posted by diegostrikes at 11:34 AM