Bengaluru go down 2-1 to Students Union

A host of controversial decisions marred Bengaluru FC’s 2-1 loss to Students Union FC in a round four match in the BDFA Super Division League, at the Bengaluru Football Stadium.

After over an hour of football that saw long spells of possession and battles in midfield, a strike from over 25 yards out by BFC skipper Myron Mendes saw stand-in coach Sandesh Boithe’s boys take the lead in the 68th minute.

However, Student’s Union equalized late on in the game through a header from Amoes, though replays showed that the ball had been cleared off the line by defender Prashanth Kalinga.

A defensive lapse late in the game allowed South United score the winner deep into extra time as Amoes latched onto a pass from midfield and placed it past a hapless Shainkhan CP in the BFC goal.

The Blues’ reserve side dropped down to fourth position on the table, as the win took South United to nine points from three games. 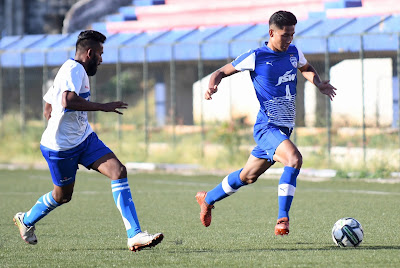 Posted by diegostrikes at 12:26 AM