In what was a stellar start for the Indian U-16s against Tajikistan today, the young colts took the lead as early as the 5th minute when Gibson lobbed the ball over the opposing custodian. Two minutes later, Sailo took advantage of a scramble inside the opposition box and scored to double India’s lead.

India tripled their lead in the 9th minute when Shabaj slotted the ball home to make the scoreline read 3-0 in less than ten minutes. Tajikistan started to fight back and in the 12th minute pulled a goal back courtesy of a penalty kick.

In the 15th minute, Tajikistan minimized their deficiency and found the Indian net once again to make the scoreline read 3-2.

After the half-time scoreline read 3-2 in India’s favour, and with Tajikistan holding on to hopes of a dramatic comeback, the Indian Colts put the match to rest.

In the 66th minute, Ricky’s through ball found Rohit Danu and the latter bundled the ball home to give India a two-goal lead cushion as the scoreline read 4-2. The full-time scoreline read the same as India finished their campaign unbeaten in three matches, accumulating seven points out of a maximum nine. 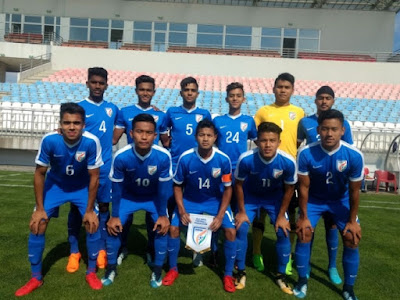 Posted by diegostrikes at 2:59 PM