An interesting tie that could have gone either way finished all even at 1-1 in the end with goals in either half. South United scored early post lemon-break but were unable to make the best of their impetus to close the door and let Independents back into the game.

South United had defender Shinu and attacker Aaron D’Costa were back in their line-up after their return from suspension and injury respectively.

South United FC began the game well on the front foot against a determined Bangalore Independents side. The action for the first 45 minutes remained firmly in the opposition half for SUFC which saw them constantly trying to break down the opposition.

They created chances constantly but were unable to convert any of them. They continued to press the Bangalore Independents defence in the first half but found no breakthroughs. They were thwarted on a few occasions by good goalkeeping or defending, but they squandered a few where a little more composure would have meant a greater lead.

The second half saw more of the same as SUFC pressed forward but were not as incisive in front of goal. The breakthrough for them came in the 66th minute when club captain Magesh found the back of the net with a well-placed shot.

Soon after they scored, it began to look like they may rue their missed chances as Independents got a bit of a hold in the game and started to create chances of their own.

Bangalore Independents struck in the 82th minute to equalise. It was a blow to SUFC and though they pressed for the win, the time was against them. They found a few more chances before the end but once again were let down by poor finishing. 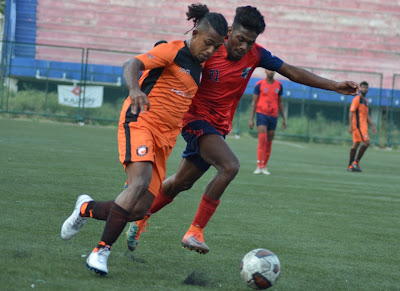 Posted by diegostrikes at 8:34 PM