AIFF & FCBU Media
Competitive sport in India will mark a much-welcome return to on-field action after a seven-month hiatus following the coronavirus pandemic, with the start of the I-League qualifiers in Kolkata from Thursday, 8 October. The first match will see FC Bengaluru United take on Bhawanipore FC at the Vivekananda Yuba Bharati Krirangan in Kolkata at IST 12.30pm on Thursday. The boys from Bengaluru were on a roll before the league was called off in March. They will be keen to resume on a winning note and get one step closer to bring back Bengaluru in the I-League.
In the lead-up to the tournament, the FCBU team, coaches and officials were isolated in a secure bio-bubble in a training facility 52 km from Bangalore. The focus was to prioritize the safety as well as physical well-being of the squad. Trackers like Dexa Scans (checking bone density), StatSports GPS Monitors (track load management) as well Heart Rate Monitors were part of the training and fitness regimen geared towards getting the squad back to match-readiness. Advice from top medical experts was incorporated at all stages to ensure a seamless transition – physically as well as mentally - to the protocols in Kolkata. As per AIFF rules, two RT-PCR test results were carried out on all members before they left for Kolkata.
The match will be telecast live on 1Sports channel as well as streamed on 1Sports Facebook page (https://www.facebook.com/1SportsInLive/).
All five participating sides have been operating their daily lives inside the COVID-19 safety bubble where they have been kept in an initial four-day isolation period, before beginning training ahead of the tournament.
FC Bengaluru Head Coach Richard Hood stated that though there are several restrictions imposed on all the sides, keeping in line with the COVID-safety regulations, operating under such guidelines have become “second nature.”
“Most of the best practices that come with the COVID Safety regulations have been the new normal and have become second nature for our squad by now,” said Hood. “We appreciate the regulations that have been charted out for us and also acknowledge the pro-activeness of the organisers in being adaptive and responsive to evolve the same as time progresses,” he added.
Hood sounded wary of his Kolkata-based opposition, who have some “experienced” campaigners in their ranks.
“Bhawanipore is a club with a big history. More importantly, they are coached by the very capable Shankarlal Chakraborty who is a highly experienced technician and respected person in our game,” said Hood. 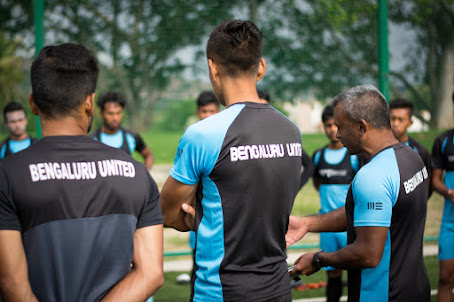 Posted by diegostrikes at 10:35 PM