AIFF and FCBU Media
Indian sport marked a triumphant return to on-field action after a seven-month hiatus in the wake of the Coronavirus pandemic with the I-League qualifiers. Bhawanipore FC who opened their account in the first game against FC Bengaluru United in Kolkata on Thursday with a 2-0 victory.
The match was played under unique circumstances with no fans, water breaks in each half and five substitutions available to coaches under the new COVID-19 protocols. However, that did little to deter the players who put in a passionate display treating fans to their first taste of live sporting action in India since the lockdown.
Bhawanipore FC head coach Shankarlal Chakraborty showed his tactical acumen, starting with a three-man defence which withstood a bright start by FC Bengaluru United. Richard Hood’s team put their opponents under pressure with good movement around the penalty box but were unable to find that final touch to show for all their effort.
The first clear-cut opportunity fell to FC Bengaluru United in the 21st minute when Bhawanipore custodian Shilton Paul came flying off his line to punch clear a corner but could not connect cleanly. However, Bengaluru failed to punish the mistake as Azharuddin Mallick, with very little time to react, was only able to head over the bar.
Paul didn’t let that minor mishap faze him though as he commanded his box impressively, keeping the Bengaluru forwards at bay with a string of impressive collections.
FC Bengaluru continued to press for the opener but much against the run of play, Bhawanipore broke the deadlock in the final minute of the first-half added time. Ghanian forward Philip Adjah was sent through on goal and his shot was only parried onto the feet of an onrushing Pankaj Moula, who was at hand to tap in the rebound.
As expected, FC Bengaluru United came out all guns blazing in the second half but were met by a well-drilled Bhawanipore defence.
With Bengaluru committing men forward, Bhawanipore doubled their lead in the 60th minute with a lightning-quick counter-attack. Altamash Sayed picked up the ball just outside his penalty box and played a long ball in search of Adjah. The Ghanian kept Bengaluru skipper Rana Gharami at bay and then thumped a powerful volley right across the face of goal, leaving the keeper no chance as the ball bounced in off the far post.
Bhawanipore then employed a solid low-block and defended in numbers restricting Bengaluru to just one shot on target in the second half, finishing the game with a well-deserved clean sheet.
After the match, Bhawanipore Head Coach Sankarlal Chakraborty said, “The opposition played well and could have scored too but our defensive game was good, and we made the most of our chances. Our discipline and defensive organization was the decisive factor. We hope to improve and build on this for the future matches.”
FC Bengaluru United Head Coach Richard Hood stated, “We weren’t very careful on the counter attacks and we need to sort out how we are going to play the remaining games in terms of how we organize our defence in the opposition half. It’s not all doom and gloom, and we look forward to the next game and the two after that.”
The win gives Bhawanipore three points and puts them on top of the five-team table, a position they would hope to maintain in their quest for Hero I-League qualification. They next take on Garhwal FC on October 14, 2020. FC Bengaluru United will look to put some points on the board as they too face Garhwal in their next outing, scheduled for October 11, 2020. 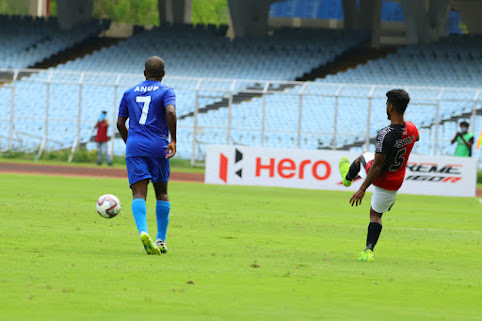 Posted by diegostrikes at 6:23 PM