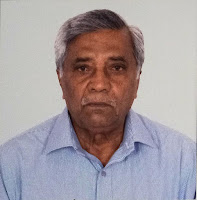 Sri K Narasimhiah, 88, former State and Railways player passed away today morning at his residence in Srinagar, Bangalore. He also represented the then famous Blues Club  and later seen managing the Young Blues FC, which now plays in the BDFA C Division League.

Narasimhiah was a top player of the 60s. He represented BDFA XI. He was the main player for Railways and participated in various tournaments in Tamil Nadu, Kerala, and other parts of the country. In Railways, he played alongside another top player Pushparaj. Later he joined Blues and retired as a State Govt. Cooperative Society employee.

Narasimhiah was passionate towards the game. Those days Blues Club representing the City area and Bangalore Muslims representing the Cantonment area were two teams that attracted large number of fans and played entertaining football.

Narasimhiah is survived by two sons and a daughter. His funeral will take place at Chamarajpet Burial ground today, 12 pm onwards.

Posted by diegostrikes at 11:26 AM