Sunil Chhetri signs on with BFC

Bengaluru FC, on Sunday, announced that club captain Sunil Chhetri had signed a new two-year deal to keep him at the club until at least 2023. Chhetri, who signed with the Blues in 2013, will see the new deal extend his stay with Bengaluru into a tenth season.

Chhetri, who joined Bengaluru in 2013, has made 203  appearances for the club since, scoring 101 goals in that time. The 36-year-old has led the club since its inception in 2013 and has topped the goal-scoring charts in each of his eight seasons with the Blues.

“I’m really happy to have signed on for two more years at Bengaluru FC. The city is home now, and the people at this club are like family to me. It feels like just yesterday that I signed for the first time here, and I have to say the journey has been nothing short of special. I love this club, the supporters and the city, all three of which I have a strong bond with, and I’m looking forward to being part of many more great moments with them,” said Chhetri, after completing formalities on his extension.

Chhetri, a six-time AIFF Player of the Year, led the Blues to their first League title in 2013, and has since won five more trophies with the club, including the Federation Cup (2015, 2017), Indian Super League (2018-19) and Super Cup (2018). In addition to several other individual awards, Chhetri was named the Asian Football Confederation’s Asian Iconin 2018 and the following year, he was conferred the Padma Shri title, India’s fourth highest civilian honour.

“Sunil has been an integral part of this club since day one. We all know what he, as a player, brings to the team. But his presence as a leader has been equally crucial to us, and especially to the youngsters coming through the ranks. He is a role model, and his influence and application has been paramount to our success. Over the last eight years, he has made this city his home and we are really happy that he has committed his future to Bengaluru FC,” said club CEO, Mandar Tamhane.

Chhetri, who scored twice against Bangladesh in India’s FIFA World Cup and AFC Asian Cup joint qualifier in Doha earlier this month, has amassed over 100 caps for the country and is India’s all-time leading scorer in international football, with 76 goals. 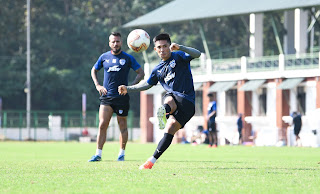 Posted by diegostrikes at 8:11 PM