Bengaluru FC’s frontmen had a field day at the National Stadium in Male, as Marco Pezzaiuoli’s side ended their AFC Cup campaign with a 6-2 win over Maziya S&RC, on Tuesday. Udanta Singh, Cleiton Silva and Leon Augustine scored first half goals, before strikes from substitutes Sivasakthi Narayanan and Bidyashagar Singh’s brace kept the Blues’ lead intact after Hamza Mohamed and Asadhulla Abdulla had pulled two back for the hosts.

Earlier, Pezzaiuoli made five changes to the team that was held to a goalless draw by Bashundhara Kings, handing starts to Sarthak Golui, Pratik Chaudhari, Rohit Kumar, Udanta and Leon, while goalkeeper Gurpreet Singh Sandhu captained the side in the absence of Sunil Chhetri. On the other bench, Risto Vidaković made three changes to the Maziya team that lost to ATK Mohun Bagan.

The Blues started the game on the front foot and broke the deadlock just six minutes from kick-off when Sarthak and Leon combined down the right flank. The eventual cross from the Bengaluru right-back found Udanta arriving in the box, and the winger made no mistake in burying his header to put Bengaluru 1-0 up.

Only moments later, Pezzaiuoli’s men were knocking on the Maziya door again, through Udanta and then Leon. Rane’s attempted cross for Udanta was a yard ahead of him before Udanta’s cross found Leon, but the latter skewed his shot wide.

The Blues scored their second goal in fortuitous circumstances when Brazilian striker Cleiton Silva poked the ball home in the 19th minute. Attempting to collect a long punt, Maziya ’keeper Shareef misjudged the flight of the ball and Silva chased the ball down and scored from close range, past the reach of Shareef. Silva would put the ball in the back of the net once again on the half hour mark, only for the assistant to raise his flag for offside.

Maziya were forced into a change when Shareef was stretchered off and substitute custodian Mamatkhonov Mirzokhid was called into action. Mirzokhid’s first involvement saw him pick the ball from the back of the net, when Leon managed to beat the offside trap and slot home through  the Uzbek ’keeper’s legs to make it 3-0.

Leon came close to scoring his second of the game on the other side of the break, but Mirzokhid was well positioned to save his effort. Jesus Blanco was alert to make two crucial blocks right after, from Jayesh and Suresh, to deny the Blues a fourth.

Pezzaiuoli rang in the first of his five changes when Danish Farooq replaced Rohit Kumar, and made further substitutions later, sending on Ajay Chhetri, Bidyashagar Singh and Sivasakthi Narayanan. Maziya pulled one back in the 67th minute through Hamza, who beat the offside trap and slotted home past Pratik’s attempted tackle and Gurpreet’s stretch to make it 3-1. However, the Blues responded just three minutes later, as Sivasakthi latched onto a cross from Udanta with a neat touch and finish, for his first goal in Bengaluru colours.

Maziya reduced the deficit once again in the 80th minute, against the run of play, when Abdulla latched onto a pass from Mohamed and slotted home from close range. Udanta had a late chance to add to his exploits, but having controlled well and cut in on his left, his finish was found wanting. Keen to get in on the act, substitute Bidyashagar scored twice in seven minutes, both times from close range, to put the game beyond the reach of Vidakovic’s men.

The result confirmed a third place finish for Bengaluru, who ended their Group D campaign with four points from three games. The Blues are in action next at the 130th edition of the Durand Cup, having confirmed their participation in the tournament that’s set to take place in Kolkata, in September. 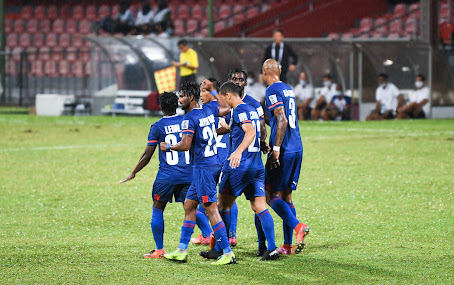 Posted by diegostrikes at 12:19 PM