Bengaluru FC Media
Naushad Moosa’s Bengaluru FC side scripted a remarkable second-half comeback to make the knockout rounds of the 2021 Durand Cup, with a 5-3 win over Indian Navy at the Vivekananda Yuba Bharati Krirangan, in Kolkata, on Tuesday. Goals from Jijo (18’), Sreyas (29’) gave the Services side a two-goal lead heading into the break before the Blues came out all guns blazing in the second period, with strikes from Leon Augustine (52’), Harmanpreet Singh (60’, 80’), Ajay Chhetri (73’) and Thoi Singh (90’ + 1’) sealing the points. Vijay (90’ + 3’) added a consolation goal for the away side in extra time.
Naushad Moosa made one change to the team that drew 2-2 with Delhi FC, with Bidyashagar Singh replacing Leon Augustine.
Blues’ goalkeeper Lara Sharma had to be alert to deny Indian Navy in the opening minutes, doing well to push a corner onto the post and out of play. At the other end, on the five-minute mark, Sivasakthi Narayanan broke free but the Indian Navy defence did well to cut out his pass into the box.
Indian Navy took the lead in the 18th minute when Jijo latched onto Lara’s clearance from a corner and volleyed home from the edge of the box. Sivasakthi had a chance to put the Blues back on level terms, but skied his effort after Harmanpreet Singh found him free in the box. Instead, Indian Navy doubled their lead ten minutes later through Sreyas VG, who ran free down the middle and placed his finish into the far corner.
The Blues almost pulled one back just past the half hour mark, when Ajith Kumar did well to bring down a long pass but couldn’t find Harmanpreet at the far post.
Leon, replacing Bidyashagar at the start of the second half, put his name on the scoreboard with a well-taken finish, after Sivasakthi’s flick sent him one on one with the ’keeper Bhaskar Roy. The scorer then turned provider, when he found Harmanpreet with an inch-perfect pass, and the forward made no mistake in finding the back of the net to make it 2-2.
With momentum on their side, the Blues pressed forward and won a penalty, after Biswa Darjee was brought down in the box. Ajay Chhetri made no mistake from the spot, finding the bottom corner to complete the turnaround and put the Blues 3-2 up. Harmanpreet added another goal to his name, chipping the ball over the onrushing ’keeper and finishing into an empty net.
The Blues added another goal in stoppage time, when Sivasakthi broke free down the right-wing and found Bekey Oram, who toyed with the Indian Navy defence before finding Thoi Singh, who placed his finish between two defenders and the ’keeper to put the Blues 5-2 up. Vijay then reduced the deficit for Indian Navy in the final minutes of added time, making it 5-3.
The win sees Bengaluru progress to the quarterfinals, where they take on Army Green, who finished second, with six points, in Group B. 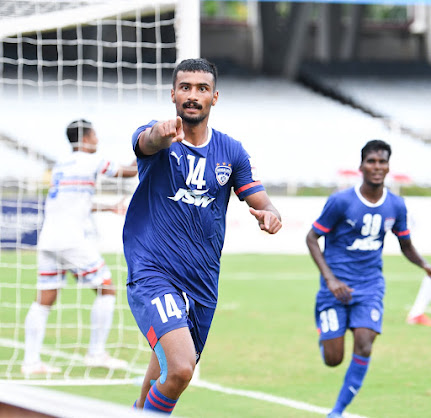 Posted by diegostrikes at 5:47 PM