FCBU and Madan Maharaj share the spoils in six-goal thriller

The seventh match of the Hero I-League Qualifiers 2021 was the setting of a pulsating encounter between FC Bengaluru United and debutants Madan Maharaj FC which finished 3-3 at the Bangalore Football Stadium. Madan Maharaj took a 2-0 lead through a brace from striker Shubham Bhowmick, before being pegged back to 2-2 by goals from Sanju Pradhan and Arun Kumar. Both sides shared one goal each in added time of the second half to finish the match with one point each.

Bengaluru United began the encounter by making it clear that they would try to gain the upper hand by monopolising possession of the ball and counter pressing high up the field immediately in case of losing possession. As FCBU played with high intensity in the opening exchanges, it remained to be seen if the home side could sustain playing with such high energy over the course of the full 90 minutes.

On the other hand, debutants Madan Maharaj FC from Madhya Pradesh looked to bide their time and grow into the game gradually. This approach reaped an early reward for MMFC, who broke the deadlock in the 12th minute through striker Shubham Bhowmick. where veteran midfielder Mehtab Hossain played a long, searching ball over the top for Bhowmick, who was initially in an offside position. MMFC got a lucky break when FCBU full back Robin Gurung failed to read the situation and made an attempt to bring the ball down. Gurung could not bring the ball under his spell and his touch ended up playing the opportunistic Bhowmick onside, who made no mistake with the finish as he blasted home the volley with his first touch, giving goalkeeper Kunzang Bhutia no chance to stop the ferocious strike.

Following the goal, the powerhouse Shubham Bhowmick played like a man high on confidence, as his imposing presence caused the FCBU defence all sorts of problems. Bengaluru United were dealt another blow at the half hour mark when their talismanic striker Pedro Manzi limped off the field after injuring his left hamstring as he tried to stretch to receive a pass. Manzi cut an emotional figure as left the field and could no longer play a part in helping his team get back on level terms. The extent of the injury remains to be seen in the coming days.

Without their star striker, Bengaluru United faced an uphill battle to get back into the game. Although the team enjoyed a majority of the possession in the first half, FCBU lacked some genuine pace on the wings or a focal point in attack that could really trouble the well settled defence of Madan Maharaj FC.

After the changeover, things turned from bad to worse for Bengaluru United. Madan Maharaj found some room to breathe after doubling their lead in the 52nd minute. It was Shubham Bhowmick again who added to FCBU’s misery. Amarendu Chakraborty played a long ball over the Bengaluru United backline, which should have been met by goalkeeper Kunzang Bhutia, who had an opportunity to come off his line and clear the danger. Instead, Bhutia chose to stay in his area, which proved to be a costly mistake as Bhowmick easily reached the pass and calmly slotted the ball past Kunzang Bhutia.

FC Bengaluru United were inches away from reducing the deficit immediately when Slovenian forward Luka Majcen found a yard in the box to turn and get a shot away. His powerful effort rattled off the MMFC crossbar, keeping the scoreline at 2-0 in favour of MMFC.

FC Bengaluru United mounted sustained pressure in their search of a way back into the match, and they were finally rewarded in the 68th minute when veteran midfielder Sanju Pradhan displayed his individual brilliance to bring his side back in touching distance. Pradhan first dispossessed his MMFC counterpart and then played a quick one-two with Ronaldo Oliveira before producing a pile driver of a hit that left substitute goalkeeper Abhishek Calvin clutching at thin air.

The home team restored parity at 2-2 in the 80th minute, as Madan Maharaj failed to deal with a low cross into the box from the left. The ball pin-balled after the initial clearance and found its way to Arun Kumar, who placed an efficient grounded finish past Abhishek Calvin.

With ten minutes left to play and the score tied at 2-2, the drama intensified further in the last phase of the game. Nitish Hazra had a golden opportunity to restore Madan Maharaj FC’s advantage in the 84th minute, but he failed to keep his composure in an eyeball to eyeball situation with the goalkeeper.

Madan Maharaj FC looked the more dominant side in the final five minutes, and almost landed the knockout punch after scoring in the 94th minute of the match through substitute forward Jiten Murmu. Abhishek Calvin launched a regular long kick up the field, which was first misjudged by FCBU defender Anup Raj. After he failed to make contact with the ball, Murmu was left with just the goalkeeper to beat, and he did so with aplomb as he placed a lofted volley over Kunzang Bhutia, who was caught off his line in no man’s land.

The game looked like it was over, with just seconds of additional time left to play. Those remaining few seconds were all it took for FCBU to draw level once again. Substitute Jaison Vaz was present inside the box as FCBU looked to commit players and deliver the ball inside the box in a hurry. When the ball came to Jaison, he kept his composure to turn and volley home the final kick of the match with his left foot. As the ball bulged in the back of the net, everyone inside the Bangalore Football Stadium seemed to be caught in frenzy as the game finished with one of the most frantic endings that one can expect.

The result leaves Madan Maharaj FC with a draw from their first match, while FC Bengaluru United remain on two points from two matches after drawing both their games in Group A thus far. 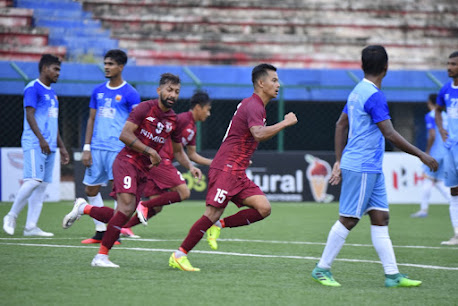 Posted by diegostrikes at 11:06 PM