FCBU Media
FC Bengaluru United put in a commanding performance to beat Bangalore Eagles 4-0 in their third game of the ongoing BDFA Super Division Championship 2021-22. A brace from Luka Majcen (1, 33), Ronaldo Oliviera (16) and Batskhemlang Thangkiew (81) sealed an all-round show from the defending champions.
FCBU were quick off the blocks, getting into their opposition’s half in the very first minute of the game. A corner taken by Ronaldo was beautifully flicked to Majcen who powered in a header to get his team on the scoreboard. FCBU kept the pressure up, constantly creating chances especially from the wings.
The second goal wasn’t long in coming – in the 16th minute a deftly crafted play between Denil and Batskhemlang set up a scoring opportunity for Ronaldo who made no mistake. There was no let-up in the intensity from the defending champions – in the 33rd minute, Bedashwar Singh and Denil combined to set up an easy tap-in for Majcen.
Bangalore Eagles upped the ante in the second half but the FCBU defence held firm, with Kinshuk, Robin Gurung, James Singh keeping them at bay, together with Srijith at the goal. A stunning long ball from Kinshuk Debnath in the 81st minute, followed by a perfect set up courtesy Ronaldo and Majcen, helped create an easy chance for Batskhemlang to make it 4-0. FCBU will be happy with their third consecutive win, and the fact that they haven’t conceded a goal thus far - an all-round team effort that holds them in good stead for the remainder of the game ahead. 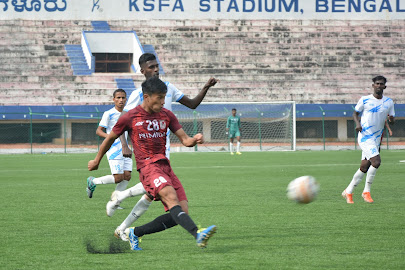 Posted by diegostrikes at 8:57 PM