Former India international player and coach and bronze medalist winner of the 1970 Bangkok Asian Games Football, Subhash Bhowmick, 71, passed away today in the wee hours of morning at Kolkata.

He was suffering from Kidney ailment for past few years and regularly undergoing dialysis.

Bhowmick was one of the few rare breeds in Indian football who equally dazzled as a player and coach. After hanging boots, he donned the role of a football coach and manager.

Not only did he managed the top three Kolkata Clubs, but also coached Salgaocar and Churchill Brothers in Goa. For the latter Goan team, he won the I-League title in 2012-13 season.

Subhash Bhowmick was always known for his involvement with the beautiful game, a great communicator, and an avid learner.

Naranyanswamy Ulaganathan recalled the time he spent with Bhowmick during his playing days in Mohun Bagan club and Santosh Trophy for Bengal.

“He was a very good person, in the 1975 Santosh Trophy at Kozhikode that Bengal won, he was literally unstoppable, easily getting past his opponents, he also scored a hattrick in that edition”, remembered from Hyderabad. “My condolences to his family", Ulaga concludes the conversation. 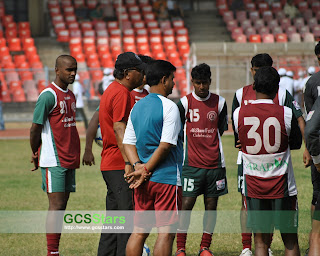 Posted by diegostrikes at 11:38 AM