FCBU Media
Spanish football giants Sevilla FC's top leadership team is here in the IT Capital of India - Bengaluru – on their first official visit, during which they will explore several opportunities along with their India partners FC Bengaluru United to expand their brand footprint in the country. The Spanish football club, which has won the prestigious UEFA Europa League six times, announced a five-year collaboration with FC Bengaluru United in early 2021 -- an endeavour that will see the two clubs focus on technological innovation, and development projects apart from increasing Sevilla FC's footprint in India.
A team of delegates from the Spanish football club, including Mr. José Castro Carmona (President, Sevilla FC), Mr. José María Cruz (CEO), Mr. Jorge Paradela (Business General Manager) and Mr. Elías Zamora (Chief Data Officer) arrived in Bengaluru on Tuesday for a 5-day visit. Expressing his team's excitement about being here in Bengaluru, Sevilla FC President Mr. José Castro Carmona said, "It is a great pleasure to be here to be in Bengaluru. We know perfectly, the huge amount of enthusiasm for our visit and the tremendous cooperation between FC Bengaluru United and Seville FC. We share many common values and one of them is the willingness to grow.”
“Sevilla FC is the second-oldest team in Spain (1890); we have won the largest number of trophies in the last two decades and we have the right momentum to grow. As part of our international strategy for the future, India is paramount; it is the first destination to expand our brand internationally. We chose Bengaluru as it is one of the most important centres for technology in the world,” he added.
During their visit, Sevilla FC will launch their first official Indian fan club in Bengaluru as part of their World Club Alliance Program. The Fan Club will appoint its India President and Secretary from Sevilla FC fans in the city. The Fan Club will also conceptualize and host Sevilla FC engagement events in partnership with FC Bengaluru United across the city.
The Spanish club together with FC Bengaluru United will also be launching a Football Hackathon on 10th June. This Hackathon will be a unique opportunity to effectively use data science in the space of professional football scouting and player performance analysis, and is the first time two football clubs have come together to host such an event.
On 11th June, the club will be launching the Sevilla FC Junior Cup, which will be focused on growing and developing the youth footballing talent in the city of Bengaluru. The inaugural edition will feature teams across five age categories (U- 8s, U- 10s, U-12s, U-14s, U-18s) plus a women’s team (open age category) battling for top honours.
The development of women’s football is a priority for Sevilla FC and today the leadership team officially launched FC Bengaluru United’s KSFA B Division Women’s team at the Bangalore Football Stadium.
Speaking on Sevilla FC's visit to the city, FC Bengaluru United Owner Mr. Gaurav Manchanda said, “This is a momentous occasion for us at FC Bengaluru United to host Sevilla FC on their maiden trip to Bengaluru. We formalised our five-year-long partnership in early 2021 and since then, we have had several successes including being awarded the Best Internationalisation Strategy at the prestigious World Football Summit (WFS) Awards. This is the largest delegation of a leadership group from a top-performing European club to visit India. We have lined up exciting events during their stay and we wanted to reciprocate the wonderful hospitality Sevilla FC extended when we were in Seville earlier this year.” 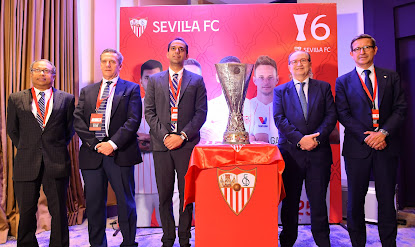 Posted by diegostrikes at 5:13 PM