Bengaluru FC’s opening encounter of the PL Next Gen Cup saw Naushad Moosa’s side go down 6-3 to Leicester City at the Leicester City Academy Grounds, in Loughborough, on Wednesday. The Foxes, who raced to a 6-0 lead through goals from Kian Pennant (13’, 27’), William Alves (18’) and Chris Popov (21’, 52’, 61), were met by a resolute second half performance from the Blue Colts, which saw Sivasakthi Narayanan (67’, 73’) and Damaitphang Lyngdoh (68’) find their name on the scoresheet.

Moosa’s boys started bright and came close to scoring inside the first five minutes when Bekey Oram’s shot was saved by Arlo Doherty in the Leicester goal. Only minutes later, the hosts took the lead when Popov drove free down the right to find Pennant, whose initial effort was saved by Sharon Padattil, only for the England international to slot home on the rebound.

Earlier, Damaitphang Lyngdoh, Thoi Singh and Lalremtluanga Fanai were named in midfield by Moosa, with Akashdeep Singh, Thoi Singh and Sivasakthi tasked in the attacking third. At the back, Robin Yadav and Felixson Fernandes marshaled a backline that had Namgyal Bhutia and Clarence Fernandes as fullbacks with Sharon in goal.

Leicester’s second came through Alves, who managed to latch onto a deflected effort to volley goalward and past Sharon. Just past the 20 minute mark, Popov scored his first of the evening, with a heavy deflection off Robin Yadav leaving Sharon rooted as the ball looped over and went in off the upright. Pennant would add another for the Foxes ahead of the break, as the Blue Colts made their way down the tunnel with a 4-0 deficit.

Into the second period, Bengaluru were pegged back again by Popov, who scored his second with a neat finish from the edge of the box. Popov rounded off his hat-trick from the spot after Dipesh Chauhan, on in the second half for Sharon, was adjudged to have fouled the Welshman in the box.

Despite their 6-0 deficit, the Blue Colts kept pushing and found the net for the first time through Sivasakthi, who slid the ball through Doherty just past the hour mark. Moments later, a set-piece routine saw Leicester clear the ball in a haste, allowing Damaitphang Lyngdoh the opportunity to strike from distance, through a crowd and past Doherty, to make it 6-2.

Bengaluru refused to relent, and scored again in the 73rd minute when Sivasakthi’s strike from distance evaded Doherty’s dive. Dipesh was called into action once again when Clarence Fernandes, making his competitive debut for the Blue Colts, was adjudged to have brought Pennant down in the box. The winger stepped up, but his spot-kick was saved well by Dipesh, who then proceeded to recover and save the strike on the rebound to keep the score unchanged.

Bengaluru continued to push forward in search of goals, but the referee called time on the proceedings, sending Naushad Moosa’s men towards an encounter for third place, for which the Blue colts will face Nottingham Forest on 30th July, Saturday, at the same venue. 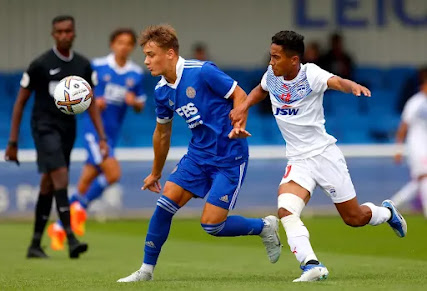 Posted by diegostrikes at 5:29 PM