The KSFA Women's B Division League came to an end yesterday with Legends De Sporting Bengaluru taking away the silverware and Young Stars FC ending as runner up. In the final game of the league, Legends girls beat Young Stars FC 1-0 with Sandya scoring in the 17th minute of the game.

Both finalists, Legends de Sporting Bengaluru and Young Stars FC both are promoted to 'A' Division for the 2022-23 season.

KSFA introduced B Division in women’s league for the first time by where 9 teams took part. The teams were divided in 2 groups with a knock-out format with the top 2 from each group. 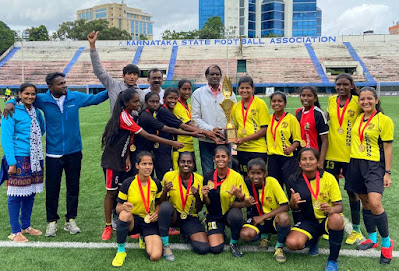 Posted by diegostrikes at 12:07 PM