Kickstart started the 2022-23 season on a brilliant note by winning Puttaiah Memorial Cup played at the Bangalore Football Stadium this evening. Kickstart lost the inaugral game at the group stage but improved from then on, and peaked when it mattered the most. In the final today, Bangalore Eagles FC could hardly match up to their ability, and handed a 3-1 loss.

I-League veteran, Princewill Emeka was quick enough to latch on a slow Eagles defense to give Kicstart an early lead.

Eagles too had their share of chances after conceding, but their strikers lacked finesse and most often than not the ball landed in Kickstart defence.

Just when everyone was hoping for an equilizer, central midfielder Ryan Wilfred with his astute football sense scored a goal. The game was only 28 minuted old and by then Kickstart we sitting pretty with a two-goal cushion.

Eagles reduced the margin in the added time when Eagles striker Sanju Kumar was unnecessarily tripped down inside the box and defender Bhanu Prakash made no mistake to score from a penalty spot.

Princewill was seen in action again after changing ends. Abhisekh, with his speedy run from the right flank floated for one Princewill, which the later made no mistake in putting the ball on the back of the net.

Kickstart failed to score more despite making enough moves. Bangalore Eagles looked good but in patches and lacked the skill to match Kickstart in all department. 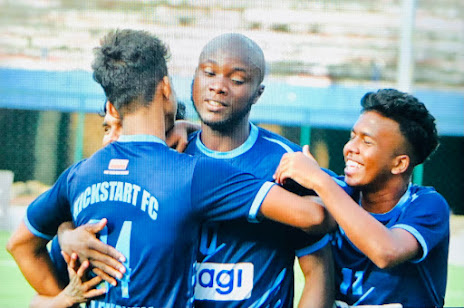 Posted by diegostrikes at 9:45 PM