Kickstart FC versus Roots FC game saw the former taking lead in the 5th minute from an Aarushi goal. Attacking from both flanks, Kickstart girls kept Roots’ defence under pressure; kept scoring regularly in the first half. Roots girls just could not keep with the pace of Kickstart forwards and conceded few easy goals.

Star striker Kaviya completed hattrick in the first half itself with Aarushi scoring her second. On the half time, score-line read 5-0 in favour of Kickstart FC.

After changing ends, Roots FC combined well in defence, though the attacks were still coming from the Kickstart end, but Roots girls were resilient to thwart Kickstart assault. This was going well for Roots with occasional counters, however striker Sanjita was easily apprehended by Kickstart defence. 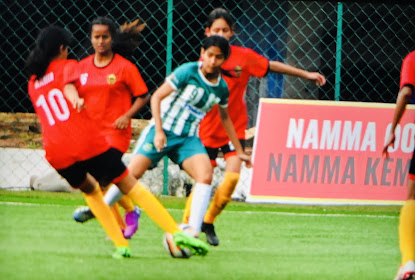 Posted by diegostrikes at 7:59 PM