Bengaluru FC Head Coach Simon Grayson said his side are eager to put on a good show when they face Odisha FC in the quarterfinal of the 2022 Durand Cup, at the Kishore Bharati Krirangan, on Saturday. The Blues, who finished the group stages in second place with two wins and two draws, are up against an Odisha side that ended atop Group D with four wins in as many games.

“Over the course of the group stage, we went up against different teams. Every game we’ve played has been a step up for us, and Saturday’s game against Odisha will be another step in that process. We’ve tried to win all these games, but the bigger picture has been the preparation for the League season that starts in a month’s time,” said Grayson, speaking to the media on the eve of the game.

Bengaluru began their campaign in Kolkata with a 2-1 win over Jamshedpur, before a convincing 4-0 win over Indian Air Force FT. Draws against FC Goa (2-2) and Mohammedan SC (1-1) saw them finish with eight points in Group A, two behind the Kolkata side.

“The games in the group stage gave us the opportunity to try two or three new systems. We’re happy with the squad that we’ve got in terms of experienced young players and also players trying to break into the first team. We want to be cohesive, be fit and the aim is to try and get my methods across to them. Our objective since the time we’ve landed in Kolkata has been to win this competition,” said Grayson.

Odisha have made a host of summer signings, with Michael Soosairaj, Narender Gahlot, Raynier Fernandes (loan from Mumbai City FC) and Lalthuammawia Ralte among the Indian arrivals. Josep Gombau’s side have six new foreign personnel, having re-acquired the services of Carlos Delgado and Diego Mauricio, alongside Victor Rodrigues, Osama Malik, Pedro Martin and Saul Crespo.

“Odisha have done very well to win the four games so far. They’re a team that have a few new faces in their squad, but we’ve got to focus on ourselves. While this is a step up in our preparations for the start of the season, I also believe this will be a step up for Odisha in terms of the opposition they’ve faced. We know their strengths and weaknesses and we have to try and make sure that they don’t cause us too much trouble in and out of possession,” added Grayson.

Striker Sunil Chhetri and Sivasakthi Narayanan lead the scoring charts for the Blues with three goals apiece, while Jerry Mawihmingthanga and Crespo have three each for Odisha heading into Saturday’s encounter.

Kick-off at the Kishore Bharati Krirangan is scheduled for 6 pm, and will be telecast live on the Sports18 Network, with live streaming available on VOOT Select and JioTV. 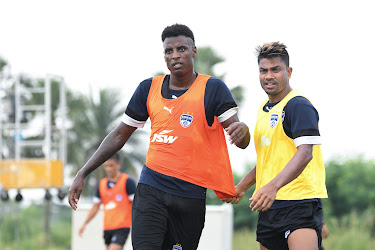 Posted by diegostrikes at 4:20 PM