Jan van Loon’s Blue Colts picked up a 3-0 victory to get back to winning ways, against FC Agniputhra in the BDFA Super Division League, at the Bangalore Football Stadium, on Monday. Kamalesh (20’) and Shighil’s (34’) first half strikes ensured a two-goal cushion at the break, followed by Monirul Molla’s (80’) late strike that sealed the points.

A physical battle ensued in the first period as both sides looked to get a foothold on the game. Bengaluru kept the pressure on the opponents and finally broke the deadlock at the 20 minute mark, with Kamalesh dropping his shoulder and skipping past his man before launching a shot into the roof of the net.

Ten minutes later, the Blue Colts doubled their lead through Shighil. The midfielder picked up the ball on the edge of the 18-yard-box and saw his low-driven shot go through several defenders and into the bottom corner.

Into the second half, BFC had several chances through winger Thoi Singh and striker Sudeer Kotikala, but luck didn’t favour the Blue Colts. Van Loon brought on Molla and Ankith Padmanabhan to bolster the attack and his substitutes made an instant impact.

Thoi’s shot on goal with ten minutes left to play was parried by Agniputhra ‘keeper Badusha only for Molla to pick up the ball and pass it into an empty net to ensure a 3-0 victory.

The Blue Colts next face Jawahar Union FC, on 16th September, at the same venue. 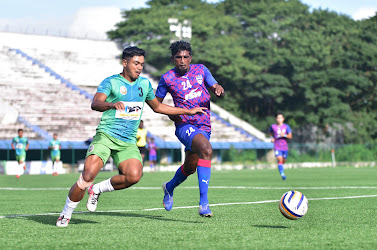 Posted by diegostrikes at 8:28 PM